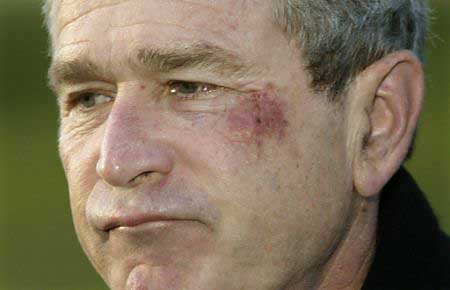 because i thought he would be too wimpy to represent me and my country was in ’84. back then we worried about the red menace, which at that time was the USSR, and i thought if that lil dweeb was across the table from one of those bushy eyebrowed Soviet podium pounders, america would be bombed immediately out of principle.

so i voted for ronald regan.

four years later i was presented with a fellow named Michael Dukakis and again i thought about the negotiating table and wimpiness and i voted for the former director of the CIA an eight year Vice President and i was terribly wrong, once again.

I blame Dukakis for this Bush too. Of course I do.

on Friday I wanted to do a chart about how much in common this son of an oil millionaire has with the Saudi son of an oil milionare but it was Ashley’s birthday and on Sunday our President nearly expired thanks to a pretzel.

Let me say that I think if he had died that way I would have considered that the coolest thing to ever happen in the entire world. Dont lie, you would have too. No one likes admitting these things, but the truth is, we have to go some way and finally George Bush would have done something interesting and original.

From what I have been told, he was choking on the pretzel, his brain was not getting enough oxygen and he fell over and the jolt his body took on impact with the ground jarred the pretzel out of his throat.

So if George had been laying his head down on his desk, like he normally does, he would have been an ex-President.

Damn you, gravity, you right-wing tool.

home / happy birthday ashley / email / you know you want to