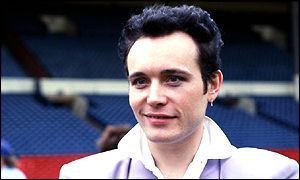 after being drunk and weilding a fake gun. I have lived over 108 years and in one of my old jobs i pumped gas at a station in Beverly Hills. One night an old fashioned convertible t-bird rolled in with Adam Ant in the back seat.

I pumped the gas and said, “hey Adam, can I get an autograph?”

The man driving the car said, “Adam, he’s talking to you.”

I said, “I really liked the drums when you were with the Ants.”

Later I discovered that most of those drums were performed by none other than tonypierce.com 2001 Man of the Year Phil Collins!

Anyhow, Adam, thanks for the autograph, I mailed it immediately to Sonja Melcher, the girl who turned me on to cool music in high school, bands like Duran Duran, the Sex Pistols, the Cure, U2 and Madness. Hope you get out of the nut house soon.

Little known fact: In 1993 two nights after seeing Nirvana live at the Forum, I took Jeanine to see Duran + Villiage People + Adam Ant at the Forum on New Years Eve. All of the bands were great.