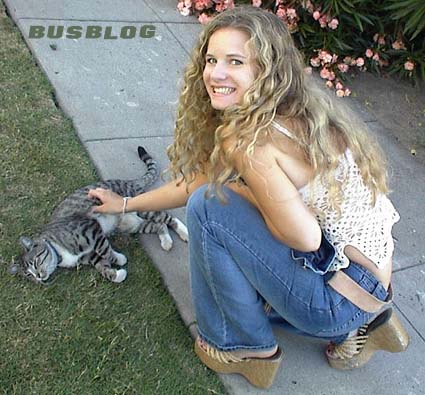 is because eventually she would figure out that im a bit wacky and the last thing that i would want her to think is that all guys are like this.

i think it’s way easier for girls who are 20 to think that all guys ever want is sex.

when i was at the age where all i wanted was sex, i also wanted to be the manager of the chicago cubs. predictably i didn’t get either.

but now poor ashley (pictured, with Losty) has to figure out how to please a guy who has had his share of carnal pleasures, has heard all the best music that will be recorded, has seen all the freaky things that hollywood will ever deliver up, and has pretty much done everything that he has wanted to do…

for the slight exception of managing the cubs to a long overdue world series championship.

so how on earth can she please me?

often she says im never satisfied. and on many levels shes right. last night we rented my favorite movie of all time, the blues brothers, and like a trooper she sat through it with me.

ive gotta say that even though the movie was made before ashley was born, it held up well and she gave a few courtesy chuckles and asked when i wanted to go to bed.

i said, im not sleepy.

she said, who said anything about sleep.

today it was my turn to compromise. i had to listen to kroq all day waiting for the new no doubt single to play so ashley could call in to win a fabulous prize. how listening to kroq 106.7 for 8 hours equals watching john belushi and dan akyroyd for 2 hours is beyond me, but many things are these days, like what are hot twenty year olds doing still hanging out with me more than a year after she must have realized that i ain’t all that.

just past signal hill on the 405 this evening the magic song was played and ashley darted through my gym bag and found my cell phone and started dialing and redialing and after a few songs it became obvious that she was not the winner. once the contest was over, it became obvious that our sunday was pretty much ruined due to the fact that she couldn’t concentrate on anything other than winning the trip to australia.

still heading south to drop off the daisy princess, she turned to me and said, what can i do that would make you happy right now.

now one reason that ashley is still in heavy rotation is because when she says things like this, the skys the limit. and if you know me you know my sky is high and wide. a question like that could begin with miniature golf and end with nine holes of real golf and tons of other variants in between.

this evening i said, “just say something nice to me.”

she said, “im sore because your ungh’s so big.”

and trust me when i tell you that even writing down that beautiful lie still brings a smile to my face.

and once again, ashley has proven that i should stop worrying about her so much, because shes far more wise than anyone gives her credit for.

her answer, for the record, earned her a trip to jamba juice and a few rounds of mario cart in her living room.