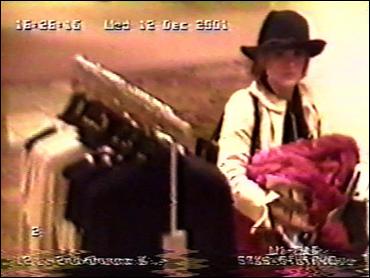 this sucks. fuck, man, that was a bitch.

winona, we saw you walking around that store in an overcoat with hands full of clothes.

i was shopping. duh. i had already paid $3,675 for some other junk earlier that day there.

you were in “girl, interrupted” a movie about a girl who, among other things said that she liked to steal just to see if she could get away with it.

was there a question in that?

yes, are you a girl who likes to see if she can steal just to get away with it?

no, that was a movie i did years ago. i produced it. i starred in it. angelina won an oscar off it. in my mind that was a totally successful project. it baffles me that people might think that i am still trying to live through that character. it’s ridiculous, actually.

what do you think of the security guard who arrested you?

that security guard was insane. she got caught trying to selling her story to the tabloids and she got caught of stealing my celebrity friend’s phone numbers from my address book after she took my purse!

how did Peter Guber get on the jury?

yeah, the former head of Sony Pictures, the guy who helped produced “Bram Stoker’s Dracula” and “Age of Innocence,” films you starred in and made him a bunch of money?

Age of Innocence only made $32 million, sort of a faliure when you think that Daniel Day-Lewis, Michelle Pfeiffer, and I were the big names.

Whatever, Dracula made $100 million, you starred in it, Gruber made money off it. What the hell was he doing on your jury?

Hey, i’m entitled to a jury of my peers, aren’t I?

But no one thought he was going to put you in jail..

Just cuz Mr. Guber is a studio chief doesn’t make him a dishonest man. But I will hate him forever, of course.

is it true that you wrote a confession statement in the detention room at Saks and it was not allowed into evidence by the judge because you hadn’t been made aware of your rights?

i woulda signed anything at that point. you know how hot it gets in overcoats in a store? i just wanted to go home. it woulda been my first crime, i would have to pay a fine and do some community service.

so you did it?

cuz then people would think you’re a weirdo thief.

hmmm, is that a good thing?

so what are you going to do now?

i’m going to appeal, go to disneyland and i’m gonna pre-order your book.

how about this idea that you might go to jail?

do you think it will be cool in prison? surely you dont.

thanks for this exclusive interview, winona.