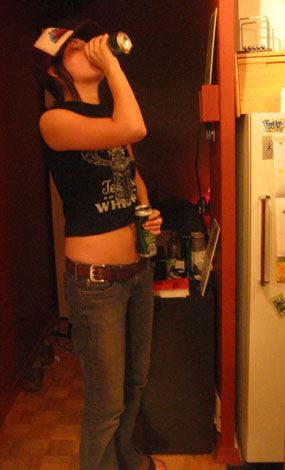 there is nothing about this girl that im not in love with.

just look at her.

if she was my girl i would do anything for her.

id work at a gas station again, be a millionaire, stop doing drugs.

so many good things happened today and still i was paying attention to the bad, and i was just done being the bad.

sometimes the devil voice in your brain isnt just saying “you’ll never make it, youre not enough.”

then i talked to karisa who just got back from vegas living the life of a superstar. she told me that she saw mamma mia and played craps at the hard rock but ate the biggest shrimp she’d ever seen at the palms and after an hour i felt one hundred per cent better.

then clipper girl came over to drop off some of her magic cookies, but had to run so she kissed me on the forehead and zoomed away in her chevrolet.

and i ate the cookies and felt another one hundred per cent better.

then this not attractive woman at all knocked on my door with an academy screener of about schmidt.

and she was not nice to me.

and she mumbled something mean about my apartment to which i said, its not my fault, my maid didnt come.

kobe bryant totally missed a free throw at the all star game, which isnt as easy as it seems.

he missed it cuz he wanted the all star game to go into double overtime so everyone could play basketball a little longer with michael jordan.

michael gave the sweetest smile when kobe hit the free throw that went in.