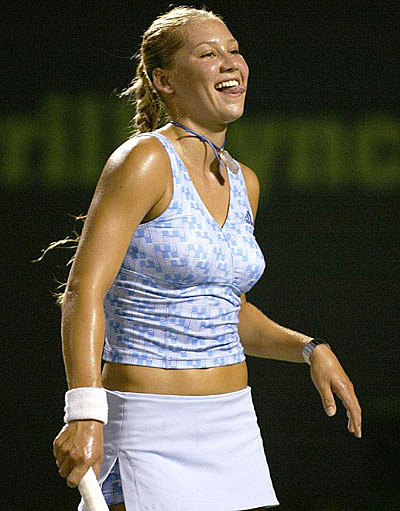 yesterday she lost in straight sets 6-1, 6-4 to fellow Russian Dinara Safina at the Nasdaq-100 Open in Miami.

after the tournament there was the typical press conference. and in order to protest the war, the busblog will now reprint the entire interview for your pleasure and not make up a word.

THE MODERATOR: Questions for Anna, please.

Q. It’s always disappointing to lose in straight sets. How much harder is it for you to lose here and not play quite so well in what’s, in effect, your home tournament?

ANNA KOURNIKOVA: Well, first of all, you know, it was a tough match. Obviously, I haven’t played in a long time. That was probably the main reason why it was so difficult for me to play today. I haven’t played since the Australian Open, and it was kind of tough. I was pretty nervous going back on the court and playing a first match in such a long time. I didn’t really know what to expect, you know. But at the same time, I’ve been working really hard. So at the end of — towards the end of the match, I really kind of got into it and everything, but it was a little too late. Otherwise, it was kind of fun playing home and in front of such a great crowd. I think we had a great crowd tonight. It was just more of a confidence thing that I haven’t played for a long time.

Q. You started the second set very strongly. Was it a case of not being able to keep up with momentum?

ANNA KOURNIKOVA: I’m sorry, was it the case of?

Q. Was it a case of you not being able to keep up with momentum?

ANNA KOURNIKOVA: Yeah, just like I said, once you haven’t played for a while, I haven’t played for almost two months, matches, and it’s very difficult. It was very difficult for me to keep the concentration for a long period of time, so it kind of was coming and going. I guess I lost my concentration after 3-0. That’s, again, a lot of — you need match practice in order to do that.

Q. You seemed particularly frustrated at the moment with your serve, it seemed the same in Australia. When you held serve, you seemed to be saying, “Come on, you can do it.”

ANNA KOURNIKOVA: What was I supposed to say? In the first set, I was kind of feeling uncomfortable and unconfident. But, you know, once, like I said, once I got into the match, it was fine in the second set.

Q. I mean, you talked in Australia that you were serving so much better away from the court. On the court, it wasn’t quite happening?

ANNA KOURNIKOVA: Away from the court?

Q. In your practice session.

Q. Is it a case of it looks like you’re working on it?

ANNA KOURNIKOVA: Yeah, like I said, like in the beginning, I was pretty nervous and unconfident playing the first match in such a long time. You know, I wasn’t feeling very comfortable out there. So no matter how well-prepared you are, if you are not feeling comfortable in the court, you know, you can’t really control or do much. So that was the case today.

Q. How do you feel you’re hitting the ball?

ANNA KOURNIKOVA: I think, you know, I mean, I’m physically in great shape. I’ve been working really hard, you know. But it’s very hard to do anything, you know, if you don’t have the confidence. But I think I was hitting — I mean I hit some great shots and everything. And in general, I think that I’m hitting the ball pretty well, but… That doesn’t matter, does it?

Q. How do you go about getting that confidence back?

ANNA KOURNIKOVA: Playing a million matches, playing a million tournaments, just like I did last year. You know, I lost five or six first rounds, and then once I won a couple of matches, I was playing really well, like, you know, at the end of the summer in California and everything. So just it’s all match practice, because it’s very different just practicing and actually playing tournaments. It’s very, very different.

Q. Why do you think you’ve had injuries over the past – I don’t know how long it is exactly? What’s been the reason for it? Is there an explanation?

ANNA KOURNIKOVA: I mean, it’s tough to say, you know it’s one thing or the other. I’ve been playing tennis since I’m five.

Q. Is that an important reason?

ANNA KOURNIKOVA: I mean, probably. But all athletes go through that. Some get it more and some get it less. I’m not saying it’s luck or anything, but it’s just certain circumstances and certain things, you know. As you get older, as I get older, I know more and I do more things for prevention and stuff.

ANNA KOURNIKOVA: Work out. I don’t know, all kinds of things, prevention and just… In general. Nothing rocket scientist, like simple things.

Q. Do you do more stretching, schedule more carefully?

ANNA KOURNIKOVA: All of those things you’ve got to take into consideration.

Q. If you get all of that right…

Q. I said, if you get all of that right, and you get a long injury-free period, what do you think you’re capable of achieving?

ANNA KOURNIKOVA: Well, I think, you know, first of all, I really want to have fun when I’m on the court and enjoy playing and, you know, that’s what my main goal is right now, is, you know, just getting back and really doing it for me and really having fun. But in terms of rankings and everything, of course I want to get back to where I was before, you know, I started getting injured. I think that I’m capable of doing that. I mean, I’m sure it’s going to take a lot of time, it’s not going to happen overnight. But I’m still 21. Some people get there earlier, some people get there later, different times, different ages. So I have plenty of time. I have nowhere to rush, you know?

Q. Did you have fun tonight? Did you enjoy it? Was it one of those things to get through?

Q. You obviously hit the ball like somebody who has been in the Top 10, you strike the ball incredibly well. But you take a lot of criticism for some of the losses that you’ve had.

ANNA KOURNIKOVA: Some of the what?

Q. Losses. You take a lot of criticism. Does that criticism hurt? Is it something you’re able to — how do you react to that?

Q. How does your motivation compare now with, say, when you were 18 or 17?

ANNA KOURNIKOVA: It’s very different. You know, when you’re younger, I was kind of, not stupid, but it’s like you’re just out there, you just play and you don’t really think much, kind of just this is what you’re supposed to do and that’s it. You don’t really think twice about it. But as I got older, it was like, you know, “Why am I here? Do I really want to do this?” Or stuff like that. You just kind of start to think more in general, and I don’t know if it’s a good thing or bad thing. Maybe it’s better to be simple. But you just start to think more, and maybe that gets in the way sometimes. But, you know, the motivation I have right now is I love the game, I really want to play, and I want to enjoy it, like I said. I really, you know, just want to go and see what I can do. That’s the motivation that I have.

Q. So you think more. Is that off the court or on the court?

ANNA KOURNIKOVA: Everything. It’s just my head is like… I don’t know. Weird.

Q. Have there been times when you’ve really doubted whether you really want to do this?

ANNA KOURNIKOVA: Not doubted. Just like trying to figure out what reasons, you know, what just kind of — like I had said, from being so — always simple and kind of just doing it without knowing, you know, when you’re young, you just — that’s what I was kind of born to do, you know, since five. So it’s like once you start to get a choice, you kind of, like, think about it.

Q. When you get the chance, obviously, Dinara is 16, do you look over and think, “Wow, that’s how it used to be, I’d go out there and hit the ball”?

ANNA KOURNIKOVA: I think she was pretty nervous, too. She wasn’t very — she’s a great girl. She’s very smart, you know. I think she was pretty nervous, too. But I really tried to block it out, who I’m playing. It was — yeah, of course it matters who I was playing against, but today was more about how I would do because it wouldn’t really matter who I was playing, you know, if I’m playing bad or good. So I was just trying to focus on my game today and try not to think about the opponent.

Q. How well do you know her?

ANNA KOURNIKOVA: Oh, I know her very well. I remember she was two years old and, you know, sleeping by the courts and everything, so…

Q. Does that make it any easier or any more difficult, playing her?

ANNA KOURNIKOVA: I think she, you know, for a big girl, she moves really well. She definitely uses her height for, you know, she has a good serve and everything. So she could be great.

Q. During the time you weren’t playing, do you have any more time to read what’s written about you in the papers? I mean, the story about your divorce came out a few weeks ago. Do you pay anymore attention to that sort of thing when you’re not playing?

ANNA KOURNIKOVA: Not really. I mean, yeah, I watch TV about the war and stuff, but I don’t really read tabloids or stuff like that, not really. I don’t read about myself, no.

Q. The story about the divorce, was that any kind of distraction for you at all, preparing for this tournament?

ANNA KOURNIKOVA: Well, you know, I’ve always — I mean, if people want to go and talk about their private and personal lives, that’s their choice. I’ve always said that it’s not something that I want to get into and it’s not something that I want to talk about, my personal and private life, you know? I understand that it’s your job to write and everything, but, you know, I don’t want to make it difficult for anybody, but it’s just I really don’t want to talk about it. That’s the way it is. But it didn’t really distract me. I really didn’t pay attention to it.