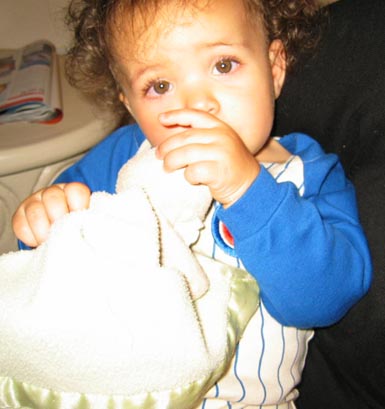 came to a spectacular ending this evening thanks to joint cooperation between the indio county sherrifs department and an undercover pair of superheroes who mysteriously found the infant and returned it to its billionaire parents in a tearful and emotional reunion.

this is tony pierce reporting from hollywood.

i didnt want to do it but i went back to the kinkos on highway 111 in palm desert even though they had charged me $24/hr for internet access.

since it was the only copy shop for miles, i asked the proprieter if he had happened to see any missing baby fliers get copied or distributed. he said yes and pointed to his corkboard which was littered with lost and found, wanted, missing, and services rendered fliers and etc.

and right in the middle was the good little girl who barely said a word other than elmo and do-do on a flier that said missing, reward.

in palm springs is it necessary to put a price on a child, i thought?

after i dialed the number i wondered how i could find out what the reward would have been if i actually wanted the money but i realized there would be no tactful way to ask and no tactful way to collect either.

collecting on a runaway german shepard would be so much easier.

we learned that life is precious. That even if youve been around something for a year you still not be totally ready to understand it, even if your mind is free of useless details, facts, and memories.

we learned that little kids spill their food a lot.

we learned that little kids can fall off a couch really easilly and almost hit their head on the edge of a glass coffee table.

but most of all we learned that palm springs really is a “short” two-hour drive from LA, and suprisingly comfortably warm – not hot – even at the begining of summer.