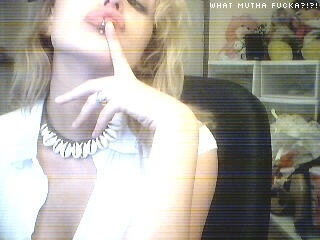 found myself talking to a writer, a real writer, a writer who could look around his house and see all the things he bought for himself because of typing, and we discussed how to keep the blog fresh, how to keep the flow flowing. how to keep it together. how to make it happen.

and i kept thinking who the hell am i to do anything other than listen. im no pro.

and my advise to him was wreck yourself.

then bring yourself back to life right before their eyes.

think of the blog as your indoor underground all night seethrough plexiglass basement basketball court.

sometimes the hotties find their way down to the gallery and you can see them up there drinking their cosmos and watching you and the fellas three on three but most the times youre just shooting free throws and practicing the baby hook.

a few times a week you should work on your slam dunks. the around the back through the leg 180 switch hands one isnt bad to begin with but the bounce run catch freethrow line takeoff jordan 88 hang timey one isnt bad either.

hang on the rim if you want but its a blog so you probably shouldnt beat your chest too hard.

i like the real world paris a lot because the girl that everyone likes is about 10 minutes away from where i grew up.

i got my braces in her hometown.

and i liked the hillary clinton interview today.

our president couldnt conduct himself like that and simply answer questions like her. hard questions. personal questions.

and i dont have to tell her life isnt fair.

the senator from new york grew up in park ridge illinois, the same neighborhood where tracy degrazia grew up. who i had a massive crush on when i was an ice cream man, and inspired me to write the stamp when i was twenty one, and who, if any of you know, i would be indebted to if you found.

same goes for stacy goodner, but for different reasons.

i told this pro writer to be fearless as fuck that if what you wrote in a blog lost you money or got you canned or got you in trouble or fucked up your shit then your shit wasnt so great in the first place, or maybe your writing wasnt all that.

his is solid though, so he shouldnt have any trouble.

and its one am, and people have left me nice aol messages, and special offers, but i will turn them all down, cuz i am a good boy

and the only risks one should take

are on the tightrope that we type on that stretches and bounces between snoozable and sensational.

and if you fuck up, just get up.