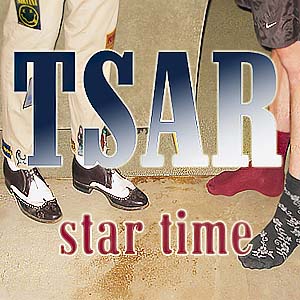 by out i mean its on the Internet, for free, on their record label’s web site.

it’s called Star Time, and it’s not the new single, it’s a taste of what will come from their new cd.

which theyve just finished making for your asses.

i like it so much that i did something i hadnt done in a long time, i played it over and over until i had written down all the words.

some of the lines might be wrong, and if they are, oh well.

i also made a little fake cd cover for it.

and now that ive told all of you about it i will listen to it again.

from the forthcoming yet-to-be-named cd

LA is the place to be, and if it aint as shocking as it used to be

take the bullet out your head

put it back in the gun

get your finger on the trigger

welcome, everybody, to the city of sound

they feast on the defeated

turn the city around

all they want to do is get up on your action.

my brothers are all proud rockers

wild and aloof and trippin on acid.

my sisters are all stun stunners

wired to the roof and rolling on adam.

hell, somebody’s got to stand up and die

well, i think i live down in hollywood

never liked no fraud who wastes his money for food

to fan the flannel flame

cuz he used you, man.

pass the pipe and take the test

cuz youre the young lee harvey

and if you dont dig that

why dont you go home

and watch some tivo, fucker

my sisters are all nice rockers

shoes to the roof, and looking up at my way.

my brothers are all jean-cutters,

glued to the tube and jumping like an osprey.

the hey hey never let me down

they love the sound of it getting around

and we say, oh

fill my heart with gladness, lord

you gotta save my soul

clean my mouth of sadness,

my brothers are all proud rockers

my sisters are all stun stunners

wash these devils off

make up your mind

to this world, come on,

get ready to let it rock on

so many miles to goooooooo

and let it rock on

why dont you say a few things about him.

she worries about what her momma will think about the things she writes on her blog, and i think thats cute. not enough people are concerned about those things, and im starting to think they should.

an angel sitting by a pool.

kristin is such a good girl that she started her blog with her highschool-aged little sister just so that they could stay in touch as kristin went back off to college.

madpony.com has been around about 9 months now, and i am completely shocked that it hasnt taken off and totally surpassed the readership of lesser blogs like, well, this one.

the only thing i can imagine is kristin is the main contributer to madpony and shes pretty obviously in love with her long-time boyfriend. could that be the reason that the floodgates of hits dont find their way to oklahoma?

then explain nay, who has had the same boyfriend since she was 14 and is recently talking about marrying him at the ripe old age of 17. nay gets a gazillion hits. (which is a lot.)

traffic and hits and “popularity” are red herrings. they mean as little about good quality content or interesting people as prom court selections. im a huge fan of the madpony sisters because theyre all-american and sweet and wonderful and funny and wholesome and creative.

i dont know what more people could want from a website.

a pg rated one.

from a tight-knit family.

actually i think i know what would drive more hits and its sad.

imagine if the sisters faught each other in public. little snipey verbal jabs at each other. that would get them attention.

imagine if the sisters wore whorish clothes or talked about sex. that would get them more hits.

and all of that has been done a zillion times and it wouldnt be much different than most of the sites out there that i dont link to and to be honest, i bet a lot of it wouldnt be nearly as interesting as the real stories of real people in a real nice family.

personally i would like it if the gals took more pics of oklahoma and their lives. and i would also like it if lauren contributed more because she can be really funny.

and of course i wish that the horses would submit a few more posts because talking horses are gold.