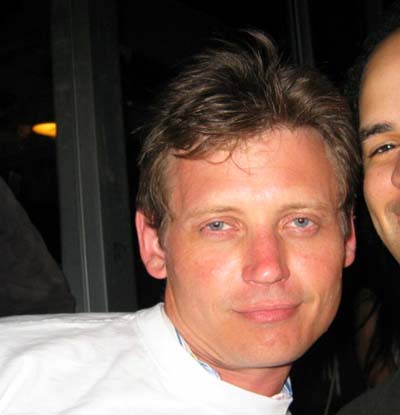 and amy and leibowitz and others will write books about the daily nexus, the mesopotania of modern writing. and when they do they will point to patrick w. whalen (pictured) who i believe was sports editor his freshman year and then editor-in-cheif his sophomore year.

it was during pat’s sophomore year that i got the courage to write to him and tell him how much i loved reading my college paper and how i wanted to write for it. i included a terrible record review, some poems, and an opinion column.

i believe pat used it to sop up a knocked over milwaukee’s best and he never called me back. i believe i ended up coming into the nexus to meet him weeks later and he said, oh yes, yes, i was just about to call you. i love what you wrote.

the educated will tell the real stories and include the facts and figures. but all i know is pat was my hero. he was the figure and the figurehead. the example and the exception. the eye and the hurricane.

amy followed him and had the impossible job of replacing him, but she did it. despite all the childish behavoir around it, sexism and whatnot. being the ringleader of adolescent genius isnt a task id assign even the brightest people, but amy still steered the ship to victory and while i raise my glass to pat today, please dont anyone think that i dont raise my other glass to amy as well.

i have many heroes from that era and they couldnt be more different and they are all beautiful and pure and have hearts of gold.

the other day at spaceland pat told me the most wonderful things. he praised me for my writing. he told me secret things, personal things that made me beam because i respect him so. in a perfect world we would all get back together and reshape american journalism and reintroduce the concept of rocking out with ones cock out. we would expose the evil doers and love the lovely.

when i tell people about pat i tell them that at the time he was the best writer in a office of best writers. and they ask is he still the best writer and i dont know because he doesnt have a blog, which is good because if he did none of you would be reading this.

pat was the singer of the first isla vista band that i was ever in, the reluctant surgeons. you had jeff whalen on guitar, max on guitar, welch on bass, me on drums, and i think someone was playing trumpet or some shit. we practiced one day in someones living room and a drunk guy came in and took off his shirt and danced for us as we played jumping jack flash.

pat was there with me when his best friend fired me at 3 in the morning after i had busted my ass.

pat was there with me when his best friend banned me during the persian gulf war when i said that i couldnt be responsible for editing any more damn war stories, because that war was killing me. that i wanted to fall in love with jeanine, who i was totally in love with.

pat was there when i rose from the dead and interviewed the chancellor of the university for the nexus’s fake competition in a three part exclusive where i was able to ask all the things that the nexus would have loved to ask but they were the nexus and she wasnt talking to us, but she would talk to me, and answered every damn question i had… whatever.

pat was there when i won the award for best art’s section despite not being entered by the guy who fired and banned me, pat entered me, pat picked out the sections for me, and it was pat who smiled big (like all of us) when i got my award, dressed in a dress, and it was pat who repeatedly yelled “irony of ironies!” as i brought home our first award for that section ever.

he has raised probably the happiest young son that ive ever seen who pat claims is now even happier.

he is single-handedly responsible for the czech republic being one of the newer members of the UN.

he inspires not only me, but his brother jeff, who fronts the rock group tsar, who idolizes pat even more than i do.

pat was the first one to put his tounge down my ear at my first nexus office party, to which i pushed him away in disgust, but then realized later that the wet willie only meant that i was baptised into the family.

people ask why all of us are so close and why we will always be so close and all i can do is say that somethings are meant to be and theres nothing you can do to fight it or change it or alter it.

and thor stands above them all.

and may i say, it was a pleasure and an honor to hang out with him these past two weekends.

my best to you, my friend.

i’ll see you at the guns n roses reunion tour at the collesium.