ken layne gave me credit for writing the first review of the new corvids record a few weeks ago. but that wasn’t a proper review. this is the proper review, cuz this record deserves a proper review, and since im the least trustworthy reviewer of this record since i live in kens former apartment and type to you from the very closet that he typed from not long ago, im obviously biased, influenced, and i hear things in this cd that bring up deep personal memories and secret smiles.

one of my x girlfriends sings on my favorite song on the disc, the bass player used to be my business partner, the rhythm guitarist and i coached a little league team together, the drummer is in my favorite band, and the german lead guitarist still has his futon in my closet.

so when i say this is the best record of the year, you might not want to run over to the link to get it, you should probably walk.

i like hearing a little tom petty mixed with springsteens nebraska. nick cave, gimme shelter, and blood and chocolate. and laynes baritone and humor definitely hearken back the days of country dick montana and the beat farmers, and i also hear some lone justice in there, peter case.

i hear what beck shoulda been going for instead of bowing to the false idols who bow to gordon lightfoot.

sounds like something paul westerberg would like to put together if he didn’t have to constantly live up to the ideal of a genius. 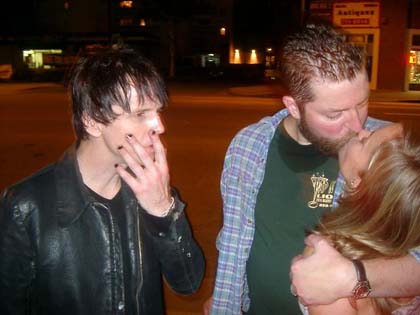 now the cute story that people should be talking about in the blogosphere is that this is a band of two mighty political bloggers: ken layne and matt welch, the brains behind la examiner, the blog that inspired former los angeles mayor richard riordan to start a newspaper that would compete with the la times.

riordan was this close to hiring ken and matt, but eventually decided that he would rather die rich than great.

on bass and drums are jeff solomon and steve coulter, respectively, members of rock group tsar.

solomon and welch wrote and edited at the daily nexus at uc santa barbara. coulter didn’t attend ucsb, but often visited to be with his friends and play in bands in isla vista. at the time he dated laura crane who a few years ago married ken.

that’s not laura who ken is kissing in the picture above, that’s kim who is now dating os, who sings with jeanine on the tune “worried.”

os dated jeanine in prauge after she and i broke up.

is it cool? os hosts the busblog doesn’t he? of course it’s cool.

axel is from germany, then he moved to london. he told me that country music makes him laugh. hes the secret weapon of this band. he plays like a ringer. he plays like the guy the georgia satellites were trying to play like and i betcha axel aint never of the damn georgia satellites and hes an inch away from sounding like j mascis and im not sure if hes heard of him neither.

this record will start making you want to talk like tom sawyer.

its what friends sound like who have great voices, great stories, great songs, and drink great wines.

and the scary thing is, if these people and a couple more just wanted to get together and sing and record, they could put together probably eight more of these cds.

do yourself a favor and pick this one up.

it’s the first one.

you’re in for a good time.