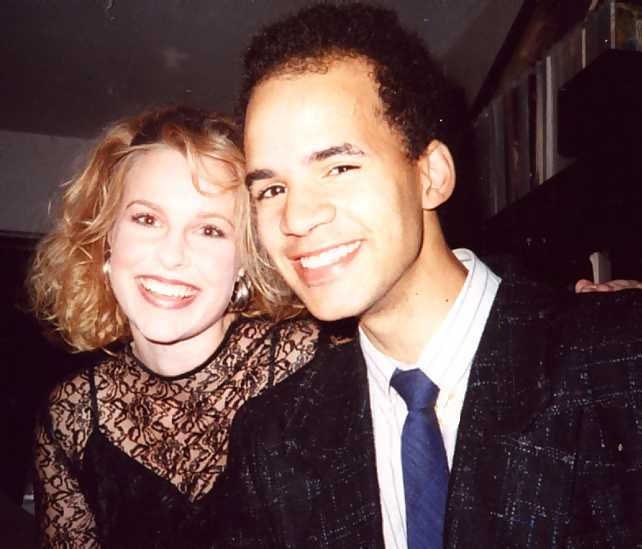 23rd birthday. a long time ago we were in college together. i think we dated for two or three weeks and then broke up but i chased her for years trying to get her back.

it was sorta like that tv show “moonlighting” and i was bruce willis and she was cybill shepherd. except hotter. and into punk rock. me, i was just a dope.

throughout the years we write together, went to concerts together, experimented with mind altering situations together, held hands A LOT, and even kissed a few times. we also played grunge on the college radio station together. at the time it was the next big thing. i cant imagine anyone better to do those things with.

as ive said a zillion times, i had the greatest college experience i could ever imagine. one of the classes i had was called Diaries and Letters. we read the diaries and letters of Vincent Van Gogh, James Joyce, Charles Darwin, and many others, but we also kept diaries, printed out five days worth on mondays and read and discussed each others on mondays and wednesdays.

this was well before the “Internet” existed.

the class was incredible, and oddly, it was perfect training for this little blog that you’re reading today.

many moons ago i wrote this diary entry about the birthday girl about the first time that i asked her to be my girlfriend which i would like to share with you as it encapsulated me and aj’s hot and cold relationship with each other as it played out in the unbelieveable setting known as Isla Vista.

it started out as a pretty cool weekend. i was at home on friday minding my own damn business when i hear gentle footsteps run up the stairs and jump on my back. it was linda (the girl i had sex with last). so she hugs me and wants to kiss me, but im thinkin “oh no, im crazy about aj”. but me and linda turn each other on just by saying hello to each other, so pretty soon we’re on the couch grinding away and im saying, “oh no, linda, im crazy about this girl named aj.”

and linda rolls on top and says inbetween bites “who’s aj?” and i go “this girl i really like, so we better stop this.”

pretty soon we’re in my room and shes locking the doors and shutting the drapes and i’m not so sure about what i Should be doing. on one hand me and aj dont really have a set relationship that we’ve disccused, but on the other hand being Good has been working for me. so i tell linkda that we probably shouldn’t, but if you evre see this girl, or kiss her, or have her grabbin, my god, so i threw her in my closet and jumped on her and she goes, “i missed you tony” and i go, “oh fuck, somebody help me out and she goes, “so do you know how much sex we could have right now” and i go “oh fuck” and she goes “too bad im on the rag” and i say “Thank you God!” oh man He was there again to help weak morons like me.

i had a little league game i was coaching with welch in a few hours anyway, so we couldnt of had That much sex. maybe a lot. an hour and a half worth. which is a lot when youre doing it as hard and fast as possible. shes a girl who has unfortunately been cursed with an amazing body. half japanese which gets you those eyes that are so sensual and exotic and sexy and hmmm, and half american which explains the huge cans. combined most guys can only last a minute, so she tells her boyfriends to make that minute hard as hell. and fast.

now i dont want to brag. i have no business bragging, trust me. but i can last more than a minute. if it was a rodeo you should last six seconds on top of that naked bucking animal. its a lot like that as well with linda. ever see people go through their day and not eat and everything is fine and then suddenly theyre Completely Starving and they sit down order the food, wait and then completely devour their meal? ok its like that too. its also like a farmer who wants it to rain on his crops and not only does it rain but a tornado comes and hail and maybe a flash flood or two too. i usually wear a mouth guard and goggles when we have sex. as soon as i get a haircut im getting a helmet.

we wouldnt have had That much sex. 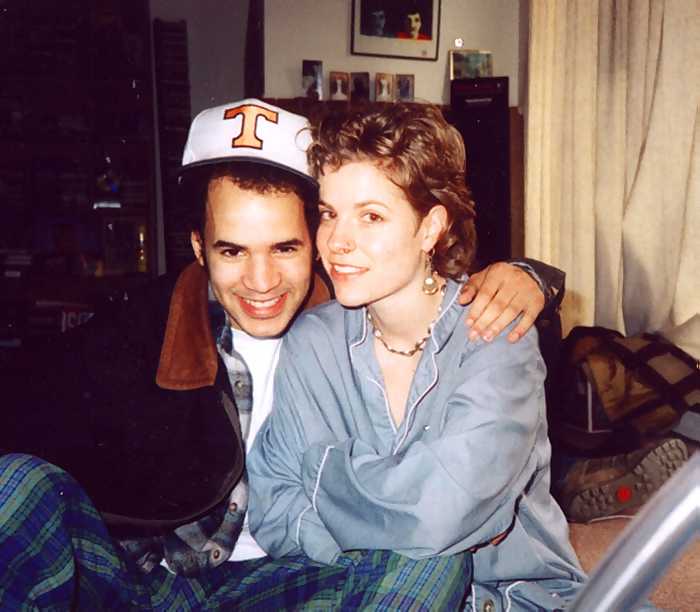 so i threw linda out and got ready and felt pretty rottenly guilty so i waled over to aj’s bestfriend’s house, this girl named sara, and i tell sara all about it and she said that i should talk to aj about if she wants a “relationship” or not. and i go “oh fuck”. the truth is, and everyone knows it, all i want is one girl and i want it to be her, but that word is such a weirdo one, especially since we sorta just started and i dint want to seem too possessive or anything. so during the game old aj and her friend rachel show up and that was nice, but aj lookd dazzeling and i could barely believe that i was on top of another girl only a few hours ago: what was i thinkin? you know, i even forget what she was wearing, but she looked so pure, so good.

later that night she was typing up a paper and i was reading bukowski’s hollywood which os let me borrow and i call up old aj and ask if i can read at her place while she typed. she said sure so i brought over some smart cookies and we had some milk with em and talked about rock and roll and stuff and she typed and i read until about 3:30am. her roomate still hadnt come home which made us think that we could push the single beds together, but i was sorta dozing off while she typed, and then her roomate came in, fuck, so aj got these pillows and a blanket and we went to her couch in the front room and slept out there but before we went to sleep i started mumbling about things and she said “what are you trying to say?”

and i got pretty scared and i said “you know, it’s sorta fun chasin a lot of girls, but it gets boring after a while and i know this is early, but right now i sorta just want one, and i’d like that one to be you.” and she was silent, as usual, and i said, “you know you dont have to say anything, i just wanted you to know that.” and she didn’t say anything and we went to sleep.

the next morning we had instant oatmeal and played sloshball. it was KCSB vs the Nexus. she played on KCSB’s team cuz she’s the Promotions Director starting in a few weeks. i played ok. made some fine defensive gems, got a hit (they had literally 30 people on the field, drinkin, so it was tough to get a hit) and they won 11-9. i was plastered. way plastered, so after we went and had some pizza and then went back to her house to finish her paper (i was proofreading it and reading Bu) and during study breaks we’d fool around a little and finally i said, “so what do you think? do you want me to see other girls or do you want me to just see you?” and she said “i dont care, you can see other girls if you want.” i felt pretty rotten inside. im prety insecure when i start really liking a girl and there it was.

all of a sudden she started showing me all of these pictures of her – modeling pictures. i didnt know she was a model. in the pictures she had lots of makeup on and pouted and posed and she looked just like very other blonde model in america and i sorta digusted me because she’s so much more than that: she skateboards, and writes great, and listens to metal for pete sake. but she said she likes it and likes acting too. oh well, i had her composite on my wall, but i took it down cuz it’s hard for me to think that it’s her. it’s not.

so that night i stayed at home and watched movies. i think i saw “how to get ahead in advertising” and “ghostbusters 2” they were both pretty good. i wasnt all that sad because somebody got me pretty stoned and in the midst of my stoneyness i thought, “fuck tony, if you could have it any way you want, youd have aj *and* linda, wouldnt you?” and i thought “yeah”. linda totally fulfils my id. shes insane and drives me crazy, but in a good way. aj’s not very passionate with me, and im sure i’d suffocate her if i was always around her and bug the shit out of her… so i thought, if i could still have aj and i had her permission to fuck the hell out of whoever i wanted, it seemed too good to believe and being drunk and stoned didnt help but after i had reviewed my notes i still came up with this answer:

I was way burnt from all that thinking and the sloshball game so i retired early. sunday the Battle of the Bad was awesome. my favorite band there was the Long Haired Leaping Gnomes. they had tons of eggs thrown at them. i probably unloaded two dozen at them. they were terrible, and funny. and good.

then i skated over to the beach, campus point, and saw Double D Nose, these jewish rappers who were great, then i went back and saw the end of the battle. by that time i was completely drunk but i was also hot so i got another mickeys 40 ouncer and pounded it and before i knew it i had this one freshman chick crying on my shoulder asking to be held and this one girl (quite drunk) (an editor of the paper) flashed me a tit and winked. all at the park. quite amusing, so i went to see aj and she was being boring so i left and went home passed out or something. i forget and woke up and went to this hootenanny at gregs house and read a poem and drank. it was held outside at el cid park and it was beautiful. i called aj up after. it was beautiful out there and i sat on my balcony and looked at everything, the ocean, the moon, the sky, the nothing, and told her that i was rally glad that we were friends and the rest i forget, but i remember her saying that she was glad i called and i felt pretty good when i passed out again.