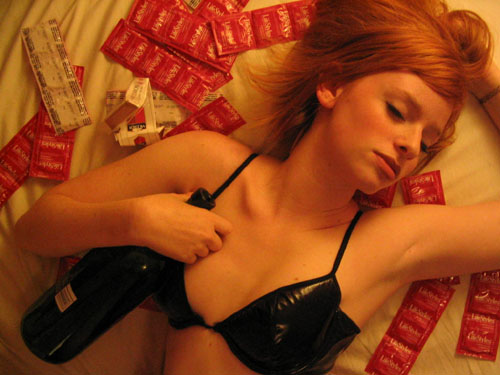 oughtta be called safe sex saturday is what miss montreal told me today.

i asked her if i was insane about my views on condom use and she said no, but that i practiced the safest sex shes ever encountered. and that i was intense about it.

i am intense about it and it kills me that i often find myself alone in my thinking on this topic.

to me it’s simple: condoms every time, period.

nobody talks about diseases that they have, and people for some reason tell me Everything. and i know zillions of people.

am i to believe that nobody i ever met ever got a disease?

do people tell you about diseases they get?

and if nobodys telling anyone then perhaps thats why we have this completely unrealistic and untrue collective unconscious which says: i wont get a disease because people that i know and people who are like me are clean. it’s only Other people who get stds.

heres another thing: everyone i know gets laid. even i get laid and im no runway model. which tells me that whatever is out there can spread fast.

so heres my christmas wish