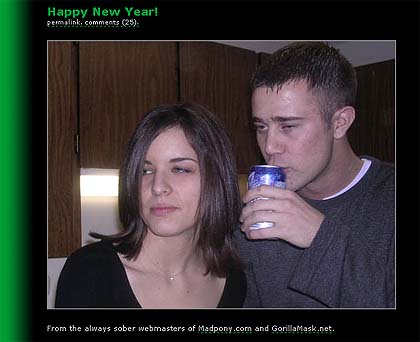 that belch you heard was the gorillamask getting his pony for christmas.

from what i remember he chased her sister, but then switched up, wisely, when he researched the age of consent in oklahoma wasnt as liberal, dare i say Ridiculous, as it is in the evergreen state.

he rubs it in by proving he can woo her with lite beer.

i hate my life.

my legitamite kids wont believe it, but there was a time when the hot chicks would fly around the world for my website-making ass.

i shoulda been a programmer like my college advisor suggested.

i didnt know what she was trying to tell me.

have i told you life isnt fair?

why do the sweater wearing boys get the sorority girls?

when will the 110 year olds get some?

i can learn to drink lite beer.

i can get a haircut.

i can learn css.