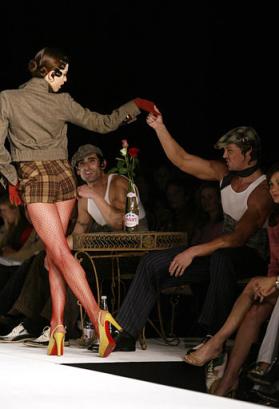 i want to be tall enough that i could get away with only hitting 50% from the line. i want 15 boards a game. i want a hook shot that you tick tock cant stop.

i want a dog and a dog walker. i want a maid that speaks even poquito englais. i want a dance partner who will look me in my face (and not down my shirt) i want to type all night till it hurts. i want to be able to have barely legal asian girls come over and be prepared enough to have at least a half keg on tap cold chillin like jakob dylan. i want ticketmaster to be something my children will have to ask me about like vhs, records, and republican presidents not named lincoln.

have i asked for this work day to be over. i want my true love to know that i might ask her hand in marriage every time we converse but 90 percent of the time its just cuz ive got nothing else to say. okay maybe eighty.

i want this sky and this sun and this air to stay the same for the rest of eternity cuz its perfect but im in this ivory tower and i have no hair to let down in which to escape.

i want everyone responsible for the 9/11 to eat it. rummy condi bushie for starters. not because they protect the rich but because theyd have been the first to bitch if gore had been where he shoulda been, which is large and in charge.

i want to have a sign and a chair and set it on the corner of hollywood and highland, i want the sign to say let me take your picture, $2, you might get into the best photography book about hollywood ever.

and an even smaller sign that says no more questions, either sign your name and print it and say cheese after you hand over the money, or keep walking.

i want to do it without talking.

whats his face said that the root of pain is want.

but my face says that the definition of being dead is to want nothing, so suck it, camus, nobody ever dresses up as you.