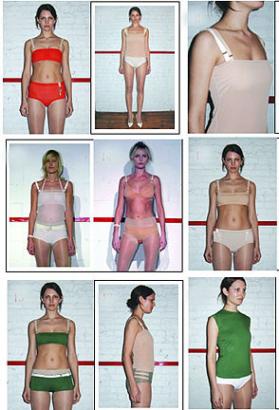 have asked why i think i can put pictures of what karisa calls “thin” young women on the busblog, and simultaneously berate women for constantly being obsessed with their bodies.

just because you see pictures of models or actresses or sports people or politicians in a blog or a magazine or on tv or on a billboard doesnt mean that you have to a)feel bad about yourself b)run out and try to look just like those people c)quit eating foods that you like.

unless your goal, of course, is to be a billboard model.

i put tons of pics of george bush up here and i dont see one person saying, “the media through its proliferation of photographs of the commander and cheif have forced me to enter my name to run for the president of the united states.”

they dont say it because it would be ridiculous.

i started a little thing called Lick Magazine a while back and this year i brought it back.

one of the beauties about it is that it’s not only written and designed exclusively by women, but it’s anonymous.

im quite aware that readers project ideas on writing when they think that the author is “hot”, similarilly, they might ignore good writing if they judge an author as not being hot. this is also ridiculous.

as much as i love raymi’s favorite blog, madpony.com, it is safe to assume that they might not be getting 1,300+ hits a day (even though they havent updated in nearly a month) solely because of the insightful, humorous, and tight writing. some of their popularity might be due to the fact that both the madpony sisters are relatively attractive young women.

Lick is anonymous for many reasons, primarilly because when authors can write with the freedom of anonymity they might write freer, and therefore, better. but also because when there’s not a name attatched theres also no baggage and the writing simply gets read for what it is.

in life we do judge people and things by their appearances.

sometimes we judge positively based on what the worldview of what “pretty” or “hot” or “sexy” is. i invite you to determine your own realms of beauty and celebrate them and ignore the trends made up by fat old men of madison avenue and their kin.

and i also suggest that if you see me putting pictures of the olsen twins on this blog, perhaps im doing it sarcastically, cuz thats probably the case.

earlier this week i raved about the pixies and implied that i was sexually attracted to the far-from-anorexic kim deal. in the comments my words were echoed by a male reader. neither of us were being sarcastic.

later in the week i gave out some sex secrets that i learned from my former girlfriend, tennis star anna kournikova who looks nothing like kim deal.

this should tell you something about the nature of men. we like all sorts of people. and some of us are attracted to a wider variety than some would expect.

if you, dear reader, judge yourself based on what pictures i put up, youre in very deep doo-doo because there might be a day when clown suits become all the vogue and where will you be without your chanel red rubber nose?

heres my advice: be yourself. quit hanging out with people who judge you positively or negatively because of your appearance. in the same sence, quit judging people by their outward appearance. look at people’s hearts, their acts, their ways, their beliefs.

i wear wrinkled ugly clothes that my mother buys me at target. i have a gut that sticks out and i call it my baby. i wear the same pair of shoes every day. i eat what i want.

but kim deal proves that there are exceptions.

i cannot implore to you more this one plea: in every aspect of your life be the exception

and quit listening to the demons in your head as they convince you that you are anything other than beautiful.