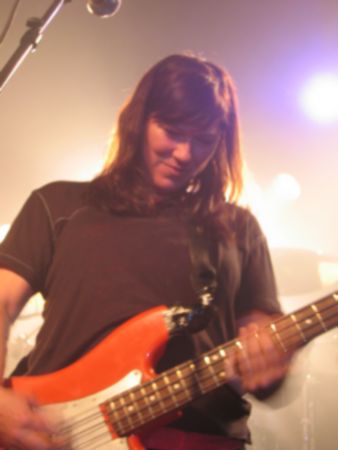 the job of a reporter is to go places that not everyone can go to and tell the story of what went down.

normally you shouldnt be jealous of the reporter.

but you will be jealous of this reporter and you should be jealous and its not normal but theres nothing normal about the pixies.

formed in boston but broke through in england the pixies were the overlooked gems during the grunge goldrush of the late eighties early nineties.

i first saw them on the janes addiction ritual de habitual tour at san jose state 1990. the lineup was primus the pixies and janes. then later in 90 at the ventura theatre. i remembered that they just sorta stood there and shoegazed like how many of their 4ad labelmates did at the time.

and even though they were making some of the most powerful and beautiful music of the time they did not sell very well, their videos werent on mtv, and you only heard “here comes your man” on the radio occassionally. this was at a time when pearl jam, stone temple pilots, soundgarden, nirvana, hole, and jane’s “been caught stealing” was on heavy rotation – even on the rock stations.

the problem was the pixies were too good. they actually had interesting lyrics, dynamics, intracacies, delicacies that the sledge hammer of grunge deafened everyone to.

primus’s “winonas big brown beaver” was better received than anything the pixies ever did.

and when they broke up there wasnt any public outcry, and when bassist kim deal’s second record with the breeders came out, nobody expected it to go platinum. but it did. and more people bought “cannonball” than all the pixies records combined. and when black francis changed his name to frank black and went solo, who would have thought that the voice of the pixies wouldnta sold as much as the blushing chain smokin feminine side of the group, and dare i say the unlikely sex symbol. but she is. i love her. i want her. and i dont know too many people who dont.

with that said the pixies returned to southern california today in a double secret undercover show. not even the glass house in pomona where they were playing would own up to it the day of the show. 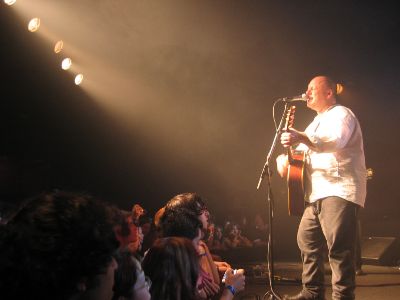 we got there at 8:30, my true love and i. pomona is only about 45 minutes from hollywood but there was a lot of traffic on the 10 east. 100,000 people were going to coachella to see 50 bands including radiohead, kraftwork, beck, the cure, bright eyes, the flaming lips, death cab, stereolab, and they will know us by the trail of the dead, international noise conspiracy, thelonious monster, air, the evens, belle & sebastian, the crystal method, pretty girls make graves, phantom planet, danger mouse, and kate sullivans second favorite band junior senior.

but the only band that most people really wanted to see out in the desert were playing a warmup secret show at a small club. tickets were $30.

the only “proof” i had was the word of a coworker who told me that his friend told her about it. i said so. then she showed me a picture of this guy hugging paris hilton.

still i bought the tickets, even though tickets after ticketmaster monopolied my ass were $94 for a pair. how could i have a chance to see this band and miss it?

my true love drove, we saw all the punk rock kids gathering around the doors, waiting for their miracle ticket that never came.

the pixies got on stage at around 9:45p and it was like the best suprise party in the world. the glasshouse had been sold out but it wasnt oversold. everyone had digital cameras except me. one guy even had a hand held flash. it was 18 and over. no beer was sold on the premises. we parked for free in a public lot three blocks away. the crowd was half college kids, half college grads of 91.

there were pixies concert tshirts for sale for $20. april 29th isnt on the shirt.

just like the mysterious popularity during the comeback and return of weezer, there is this, the return of the pixies who sing as beautifully live as they do on record. who play like grownups on stage even when theyre spitting out their camel lights in time to join a chorus.

the pixies have made a glorious and heartwarming comeback despite not having a new song, a new album, or a new video.

the news is that theyre back, and thats reason enough to celebrate.

and unlike this beautiful encore, tonight there was none.

In Heaven / Where is My Mind 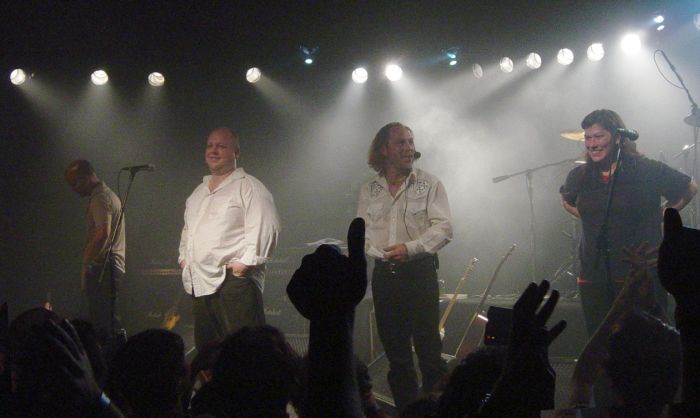