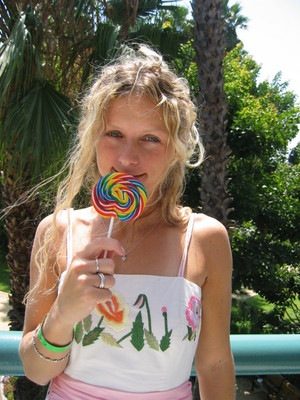 makes me pissed off at the Instapundit. by tony pierce, 110.

as you are well aware, today the paper of record, the epitome of high class american journalism, printed part of an interview with me, and linked this very blog on from its website.

the approximate amount of traffic that i will get from that link from the nyt will be around 3,000 hits today. not bad when you consider that i average about 1,000 hits a day.

however, earlier this month, my new best friend atrios linked me and i got 7,000 hits, more than twice the number of the highly respected and deservedly so new york times.

atrois’s numbers still pale in comparison to the Instapundit who could easilly bring in 3, 4, or 5 times the amount of traffic to the fortunate blog who is lucky enough to find himself on the other end of a link when Indy decides to take a break from blogging, as he did yesterday as he is away travelling.

glenn’s site, instapundit.com averages over 120,000 hits a day, according to his site meter.

this hour alone he got more hits (4,765) from the blogosphere than i will get all day from the new york times.

my hope is that my man would actually do something interesting with those hits other than just be a drudgeclone.

and although i am not implying that he is intentionally abusing his influence by linking solely to news articles and bloggers and blogs who echo is political bent, i would like to invite him to broaden his scope and share the love a little more than he has done in recent months, particularilly in regards to non-partisan news stories like the involvement of Riggs Bank and their record-breaking fine of $25 million for aiding the Saudi’s to money launder and fund at least two of the 19 terrorists responsible for the tragedies on 9/11.

the reason mr. reynolds gets so many hits a day is because he is generally believed to be a reliable news filter. as a law professor he apparently has enough free time in his day to read scores of newspapers and websites and as a free service to the web he links to many of those current event stories and news blurbs and provides insightful and reasonable commentary in short, readable chunks.

however when he refuses to do things like discuss the testimony that donald rumsfeld gave earlier this month, seriously discuss the accusations that pulitzer winning investigative reporter seymour hersh levvied against the defense secretary saying that the cia said that rumsfeld expanded a highly secretive operation originally intended to find Al Qaeda to include the aggressive and sexual interrogation of prisoners in Iraq, or even mention Riggs Bank and its relationship to President Bush’s uncle Jonathan (an executive of Riggs Investment), the illusion of impartiality is diminished.

Riggs Bank is the infamous Washington DC establishment best know as the being where Saudi Princess Haifa Al-Faisal, wife of Saudi Ambassador Prince Bandar allegedly sent nearly a half million dollars to the saudi “student” Omar al-Bayoumi who then gave some of the money to Khalid al-Mihdhar and Nawaf al-Hazmi.

Khalid al-Mihdhar and Nawaf al-Hazmi, pictured, of course are two of the nineteen 9/11 hijackers, 15 of whom were Saudi, like osama bin ladin.

The ties between the bush family and the prince and princess go far beyond banking, which might be one reason why the President censored 28 pages of a 9/11 congressional report that dealt with the Saudi’s role in the terrorist attacks.

“My judgment is 95 percent of that information could be declassified, become uncensored so the American people would know,” Sen. Richard Shelby (R-Ala.), former vice chairman of the Senate Intelligence Committee, said last July on “Meet the Press”.

Shelby who said that he had read all 28 pages that had been redacted, speculated that the reason that the Bush Administration is keeping those pages from the American public is because of politics.

“I think it might be embarrassing to international relations,” he said.

So is the Instapundit also concerned about embarrasing international relations between the USA and Saudi Arabia? is that why he refuses to even blog the words “Riggs Bank” who was fined last month for doing things like not even mentioning approximately $30 million in transactions between the Saudis and “charities” that they donate to, some who have members of al-queda on their board.

I would think that any serious political blogger would be interested in this, which might be the juiciest political story of the year. The uncle of the president, Jonathan Bush, who is the brother of the former president, turning the other way so that the saudi crown can fund the terrorists behind 9/11?

i know uncle bush probably didnt physically do anything, but he turned his back so that those attrocities could happen.

and isnt that just as bad?

and isnt anyone who turns their backs on attrocities specifically surrounding 9/11 a traitor in these, the days of the Patriot Act?

but if i had the luxury of 15 times that, i think i would want to use my superpowers to continue the discussions that are nearest and dearest to america’s heart.

even if it means, for example, including the president and his uncle, and the bank that was central to letting it happen.