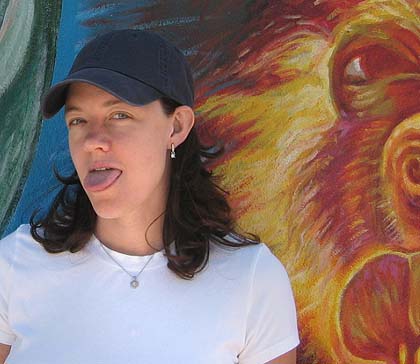 its five o’clock and it wasnt that long ago that we were having breakfast at fred sixty two. she had this eggs sandwich on a bagel with avecado and goat cheese tomato and hash browns. i had the two by four which is two slices of bread two eggs two bacons and hash browns.

she had coffee i had chocolate milk. everything went down real nice sitting out there with the shade of vermont across the street from the world famous house of pies.

all the cool kids were there. if you were older and grayer you were at the fake french place where the coffee shop used to be. figaro something. name escapes me.

eighty in the shadey two bucks for extra gravy.

last night we watched Bad(er) Santa on dvd. i couldnt believe how much i laughed out loud.

listening to cheap trick on mp3 with all the windows open and the long shadows coming through the french doors.

coke next to the rum.

thinking hard about not doing a got damn thing.

now its lou reed doing sweet jane from i think berlin that album the one that sounds like the grateful dead and pink floyd with the dead winning a little.

this morning we woke up and i said what would it be like to be little again and right now we’d be on summer vacation. every day is saturday.

she said there was a point when i realized that i was lucky to be on summer vacation because my mom had to go to work.

and i remember having the same realization when i was twelve or so.

and somewhere i forgot that the true success in life is breaking the shackles of having to go to work every day.

i had it going for a little while there.

but first i want to put a new blook out.

call it bush can lick my nuts or something.

walking down vermont is liking listening to sweet jane

you realize that pretty much nobody is falling for this bullshit

that you should just relax

drop off your dirty shit to the old man

free time is priceless, laundry is for suckers.

kiss the girl in front of you before she can say no.

the most dominant center in basketball since wilt.

the empire was showing signs of cracking when jerry west left to gm the worst team in the nba at the time, the memphis grizzlies. this year they made the playoffs.

and now after two years in a row without a ring phils gone and now it looks like shaq is on his way out.

shaq, my favorite laker since magic.

all so kobe will re-sign?

the lakers without jerry west are panicking and thinking that because six foot nine ben wallace could lead the lead in boards, size doesnt matter.

and ben wallace is a freak of nature. he’s an anomolie. and brian grant is no ben wallace, and hes definately no shaq.

i would have traded kobe and built around shaq. the only consistant laker starter in the playoffs. the only one who improved in the finals despite the refs and their calls against him.

this year will prove one thing once and for all, kobe is no michael jordan, the lakers are nothing without shaq, and phoenix will win the west.

it will be easy to get laker tickets at staples.

if they wanted to trade shaq they should have traded him to sacto for webber and brad miller.

people would say, you dont trade within your conference, you dont want him to come back to bite you.

but when you talk about sacramento you neednt worry.

the kings dont know how to win.

im just glad that chick hearn didnt have to be around to see this.