the topic was Phish’s final concert which happened on sunday

it began with Seth:

As I stated before, their musicianship, and consequently, their significance is tarnished by the pathetic sychophants who want to argue that Phish is teh greatest evar or original or even just different than the rest. The reason why it is a joke is because the fans are the fan of the scene. So when these brain dead shroomed out pigpens speak as if Phish is God, then it prevents observers from objectively gauging the musical ability of the band.

The guys can play some instruments. But that is about it, which is why they are jam band. Songwriting? Phish couldn’t write their way out of a nutsack (/cartman). Be instrumental. Instrumentalists can be great. But don’t pretend like you can write a song when the song exists merely as a pretext for a 12 minute jam using things like vaccum cleaners and such. I think Phish catered to their stoned out fans, and, as such, were limited as musicians.

Hopefully, for the sake of the artists, the band members can leave behind that wretched scene and grow musically.

Slave to the Traffic Light

My Friend, My Friend

The Man who Stepped into Yesterday

All composition, all well done, possibly some of the best composition done (outside of the jazz and classical worlds) in the late 80’s / early 90’s. The improvisational things were spectacular at times, boring at others, but the jams – while a fun and occasionally interesting sideshow, were never what made phish great. What made them great was the composition, and the willingness to compose outside of the 4/4 3.5 minute rock song standard format.

Take Guyute for example, go download it – try and count it. Betcha ya can’t.

And they executed it flawlessly on stage (ok maybe not everytime, but more often than not) time after time.

Name me a band that writes and plays a wide variety of musical styles, well, with interesting tempo shifts, interesting key changes, executes on stage, and has a care-free attitude centered around having fun – and that’s a band I want to go see (previously, they were called phish, we’ll see if someone else with as much talent comes along. it will probably be a while.)

To get it right, they practiced and practiced. Then along came wives and children and the like and the most time consuming thing they did, practice, fell by the wayside. So they moved away from executing on the complicated compositions and to having fun improvising for a while.

Like I said, sometimes it was great, sometimes it was just plain bad, but for a few years it was a new musical direction. As a big jazz fan, and a big phish fan, I can understand a few bad improv sessions, Miles & Coltrane – they both have some real stinkers recorded, so does phish – it’s ok, its part of the improv ethic. However, the jams didn’t really grow – into new forms nor into new composition, they lost the time to practice, and so they hung ’em up. Wise, not wise? who can say, bands form and disapate all the time, I’m just glad that they formed, played their songs and improvs for us over the course of 21 years, left some great memories and some great music lying around for future generations to dig, ya dig?

And that, my friends, is why many people do not prefer the musical stylings of Phish.

posted by eustacescrubb at 6:54 PM PST on August 17

And that, eustacescrubb, is why I went and saw them. Say what you will, but you can never accuse them of being “formulaic.”

kurtosis: I’m counting 7 for every bar all the way through that first section of Guyute before the instrumental section. 21’s a multiple of 7, but I don’t think you need to keep counting that long. Heh. 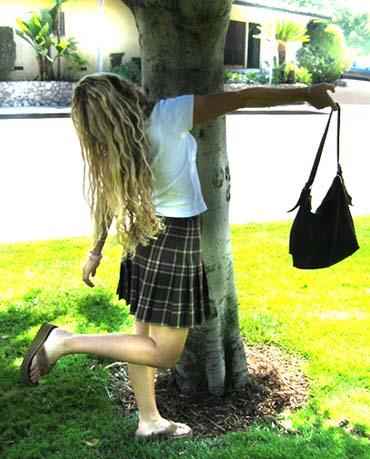 went to hang out in front of the Winn Dixie and we saw these girls and one of them was all ‘oh shit aren’t you that guy from round oak central?’

and we were all LOL it wuz pretty cool

then we listened to tool it wuz awesome.

tomorrow im going to a hip hop show at one of my favorite hide outs.

in the xbi the best way to hide out is in plain sight.

alot of the fellas are security guards or meter maids.

me, i like to volunteer at the library or check i.d.s at the viper.

and sometimes those little clubs co-op a gig with a big studio or company or organization.

the thing is, you usually dont bring someone from the xbi into one of your hideouts. but i know how much danielle loves rap.

im going to miss her a great deal.

yesterday she saw how sad i was that she was leaving, so today she wore a plaid mini skirt for me cuz she knows its my favorite.

bananarama said a mouthful when they said its a cruel summer

she couldnt even look at me, nor i she

she turned a gay guy straight today i saw it with my own eyes.

be glad yr not here.

im bummed out that you guys arent getting along. you two were super cute together when i met you the first time. im not picking sides on this. all sides lose anyway in these matters, except those of us who read this as literature.

and as literature, i must say, this post kicked ass.

i will steal as much of it as i can remember in upcoming screeds.

i also found interest in the whole canada/america thing. not until blogs did i ever know there was tension there – or even much difference.

anyway, if i were to describe the day that i met raymi, i would say that it was like meeting a younger, hotter, shorter, brunetter courtney love. the entire world was radiating through her and back out. warts and all as they say.

i think she expresses that pretty well in her blog, which is why we all like her blog.

love, in my case.

she is a rockstar several times over with just as many ways to inspire us as to make us wince. but somehow she has like eight rockstars in her trying to rock their way out.

it saddens me that it has come to this between you because i saw you take care of her when she needed someone and since no amount of pussy is worth that much stress, i knew you must have really loved her.

i’m glad that you posted what you did today and promised not to make more of it publicly (and i know posting this on my blog now isnt making it any less-public, but wtf.) not that life is all gorgeous all the time, nor should be portayed in such bullshit ways. but im pretty sure you will live up to your word. and im glad you didnt trash her.

i like that you explained to us all how you cheated on her.

you two are classic people and excellent souls. it is a absolute honor to be likened to either of you because i have the utmost respect for both of you. you both continue to push the envelope in far more ways than showing green buds and titties.

you inspire me each time i come to your blogs and i want to steal everything.

just remember that no matter what,

i know there are people who lurk out there. i even know that some of them are quite famous and powerful.

some of my friends know these people and they ask me occasionally if i know how badass i am to have these people as readers, but im not impressed.

even the popular and famous need to read something on their internet screens.

hello, all of you: friends, foes, famous, not so famous, and the ignored.

i can understand why certain people would want to leave anonymous comments. some people have an awful lot to be ashamed about. some people play politics regarding what blogs they read and what they dont. some people are concerned by what their friends and associates would think, gads, if they signed their name to a comment on the busblog, or lord help them, agreed with me publicly.

what i can’t understand is why people would leave anonymous negative comments to me regarding my attack on Peeps.

my happy easter photo essay is one of my favorites.

in it i denounced Christians for allowing their most holy religious holiday to be taken over by chocolate treats, jelly beans, and the easter bunny. i question them for giving their children peeps and letting the american culture water down the day that their messiah rose from the dead after paying for our sins.

and i did it by telling the story of Angus Young, my favorite guitarist of all time, who, like Jesus, also had four brothers. I asked if Angus would appreciate Quiet Riot music on his birthday instead of AC/DC anthems.

as a Christian I would have thought that other Christians would agree with me, but in the two and a half years I have gotten a variety of negative reaction from certain Christians.

last night’s being the most disturbing.

not only was there an anonymous comment that denounced me, calling me dumb, telling me that he didnt understand the Peeps point, but then went over to my friend and yours, danielle’s blog, and told me that she shouldnt be friends with me anymore, infact she should shoot me in the face!

fortunately danielle is a typical sagatarius and you cant tell those people to do anything, so i type to you from the cockpit of chopper one with no bullet holes in my lovely face

but i wonder if the Peeps industry wasn’t behind the couplet of comments that have infested this blog and danielle’s?

i never said that Peeps should be outlawed. Hell, make Jesus Peeps. make manger Peeps. make jenna fucking jamison peeps for all i care, but dont threaten to shoot me in the face because of a photo essay.

that you admit to not understand.

it will not suprise me if one day i do get killed by a gun + bullet + idiot, but i doubt that it will happen over a misunderstanding surrounding Peeps.

and if i do go down that way,

promise me that you will avenge my wrongful death

with an unrelenting barrage of Pez.