about mr. jim gilliam, the co-producer of Outfoxed

and the man who just pulled off the first quicktime fisking of television’s own bill o’reilly. 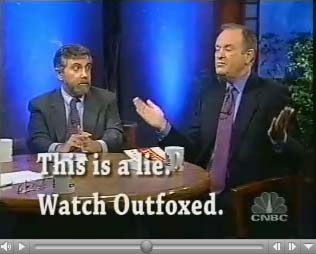 and he did it beautifully.

actually his About page on his website says it perfectly:

In the wake of 9/11, Gilliam left his position as chief technology officer of high-profile startup Business.com and devoted his time to more pressing matters. Through MoveOn.org, in 2003, he hooked up with veteran filmmaker Robert Greenwald to research and help produce the groundbreaking documentary, “Uncovered: The War on Iraq” about the faulty intelligence that led the U.S. to war. Bringing together the world of film, politics, and the internet, “Uncovered” defined a new generation of films — the grassroots political documentary.

Gilliam then co-produced Greenwald’s next film, “Outfoxed: Rupert Murdoch’s War on Journalism,” an unprecedented look at the propaganda techniques employed by FOX News.

Prior to Business.com, Gilliam was the chief architect at eCompanies, a venture capital firm and incubator in Santa Monica, and a principal software engineer at Lycos, one of the first internet search engines. He has been blogging at jimgilliam.com since 1999.

i cant wait to see his next film.