that i dont get along with. it’s true. i try to make sure that the antagonism are based on purely professional reasons and not personal or political, and you know what, its not hard to do.

its so easy to hate someone for being sloppy and consistantly ill informed and slothful with ideas and vision and lazy and unappreciative of the opportunity to work for the xbi at this time when everything is changing and we are at the forefront etc etc.

and i watch myself as i talk to them. as does my crew. the other day one of them said dude you can totally tell how much you and col sanders dont get along. you barely talk to her. its all business. no fun. youre the funnest guy at work and she and sgt bilko get no love.

and its true and i will try to work on it i swear yoda. fine, i will fix it.

the other day chris matthews had someone on his program, as a guest, whom he didnt treat politely or properly.

michelle malkin, the well spoken fox news contract pundit and right wing author of In Defense of Internment: The Case for “Racial Profiling” in World War II and the War on Terror was on a segment with da mayor, former sf kingpin willie brown.

willie wondered aloud why kerry is being questioned about his triple purple heart showing at the vietnam war:

to which malkin, who actually read the controversial swift boat veteran book, apparently, unfit for command, said that yes, there were some people who questioned exactly how much the democratic nominee for president got shot, how deep it was, how much shrapnel is in his body, and who was responisble for those wounds.

MALKIN: Well, yes. Why don’t people ask him more specific questions about the shrapnel in his leg. They are legitimate questions about whether or not it was a self-inflicted wound.

MATTHEWS: What do you mean by self-inflicted? Are you saying he shot himself on purpose? Is that what you’re saying?

MALKIN: Did you read the book…

it’s true matthews was asking the fetching though creepy malkin whether she believed that kerry had shot himself to get out of the war, an explosive accusation if ever there was one, on par to questions of bush’s accused vietnam war attrocities (missing 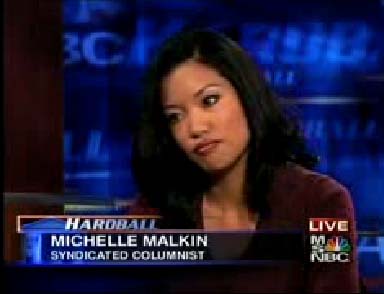 manditory physicals to avoid detection of illegal substances, attempting to transfer to an inactive unit to avoid any actual combat, deserting the national guard, and destroying and/or hiding records that would show a three-month unexcused absence (thus desertion and not awol) from the guard.)

michelle malkin was referencing amazon’s #1 best selling book this week and quoting its wildest accusation. she has all the right in the world to reference this book, and since matthews began his program with a swift boat vet questioning kerry’s injuries why isn’t malkin allowed to *gasp* actually discuss what was written and is being bought?

MALKIN: I’m saying some of these soldiers…

MATTHEWS: And I’m asking a question.

MALKIN: And I’m answering it.

MATTHEWS: Did he shoot himself on purpose?

MALKIN: Some of the soldiers have made allegations that these were self-inflicted wounds.

MATTHEWS: No one has ever accused him of shooting himself on purpose.

MALKIN: That these were self-inflicted wounds.

MATTHEWS: Your saying there are he shot himself on purpose, that’s a criminal act.

MALKIN: I’m saying that I’ve read the book and some of the…

my belief is that Chris Matthews has been watching too much Fox News. a good interviewer, first of all is prepared. malkin caught matthews napping. he had obviously not read the book and was embarrased.

there were several ways that he could have dealt with this situation. he could have said that because one of the authors was an outright racist and kook, the book’s validity is in doubt, and since no one who ever actually served with kerry had input on the book, it’s 30 year-old heresay written for the sole purpose of either financial gain or political preference.

kerry has been in office twenty years. he and his band of brothers re-unite for many kerry campaigns, why does this book come out now? all good reasons to question and thus ignore this book at this time.

particularily because it’s generally poor form to spit on vietnam vets in 2004, of any political party.

which is why i havent bothered myself with that book.

another way to respond to such a situation is to ask malkin if she agrees with the claim.

the way you would do it is say, “thats interesting, the vets who weren’t in his boat or under his command write that they believe that he shot himself to get out of the war. maybe i will read this book now. but since you read it, do you believe them? are their claims believable in context of the full book?”

for that would expose malkin into acknowledging whether she read the entire book or just the juicy bits, which isnt criminal but, well, tacky.

instead, matthews melts down o’reilly style and gets beaten again by the sassy lassy, which has to be an unfortunate experience for the agressive hardballer. 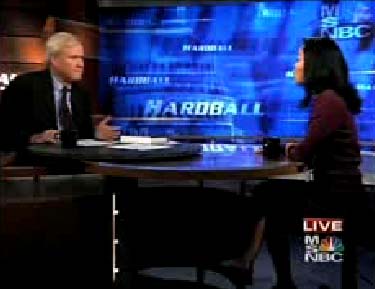 MATTHEWS: I want an answer yes or no, Michelle.

MALKIN: Some of the veterans say…

MATTHEWS: No. No one has ever accused him of shooting himself on purpose.

MALKIN: Yes. Some of them say that.

MATTHEWS: Tell me where that…

MATTHEWS: This is not a show for this kind of talk. Are you accusing him of shooting himself on purpose to avoid combat or to get credit?

MALKIN: I’m saying that’s what some of these…

MATTHEWS: Give me a name.

she not only gave a name, she gave two. and because she read the book and he didnt, he doesnt know who those two are and how they were misquoted.

nor does she need to take defensive tact of “hey we’re talking about their book, not mine. ask them about why they say these things. i wasn’t in that war, who am i to judge? i just brought it up because Da Mayor is saying that no one is questioning his wounds. the point is, someone is questioning the wounds and they’re selling a crapload of books by saying it, and maybe you two should have read it by now.”

unfortunately matthews would have stopped her at the first hey.

heres the rest of the exchange:

MALKIN: These people have…

MATTHEWS: And they said he shot himself on purpose to avoid combat or take credit for a wound?

MALKIN: These people have cast a lot of doubt on whether or not…

MALKIN: Did you read the section in the book…

MATTHEWS: I want a statement from you on this program, say to me right, that you believe he shot himself to get credit for a purpose of heart.

MATTHEWS: Why did you say?

MALKIN: I’m talking about what’s in the book.

MATTHEWS: What is in the book. Is there…is there a direct accusation in any book you’ve ever read in your life that says John Kerry ever shot himself on purpose to get credit for a purple heart? On purpose? 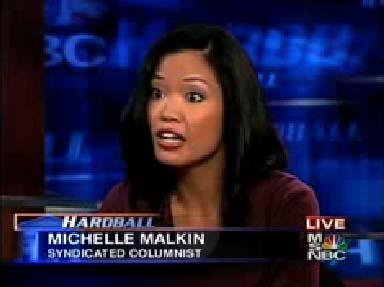 MATTHEWS: On purpose? Yes or no, Michelle.

MATTHEWS: Did he say on it purpose.

MALKIN: There are doubts about whether or not it was intense rifle fire or not. And I wish you would ask these questions of John Kerry instead of me.

MATTHEWS: I have never heard anyone say he shot himself on purpose.

I haven’t heard you say it.

MATTHEWS: If he shot himself on purpose. No. I have not asked him that.

MATTHEWS: No, I don’t. It’s never occurred to me.

my advice to chris matthews is to quit trying to be bill o’reilly, who nobody likes and nobody respects. hes a blowhard who isnt interested in being anything other than a clown.

if matthews wants to be a clown then fine. tv clowns make a lot of money.

but the truth is you can have quick-paced, spirited, politely delivered intellectual debates on tv where columnists (like matthews and malkin) discuss the likelihoods of such claims and the believablilty of sources and comparisons of counter-claims. people will actually watch such things. yes there could be a siskel and ebert of politics if only there were two people who could take themselves out of the partisan attatchments to ideas.

you can say that the other night chris matthews blew it and michelle malkin defended herself very well while at the same time calling bush a retard. its ok.

its ok for matthews to not fall for the limbaugh trap of oafish bombacity. is that a word?

i disagree with pretty much everything the asian hottie from the right has ever said on tv, but she was wronged the other night on msnbc and matthews should own up to it and check himself instead of pretending to “stand up” to anything.