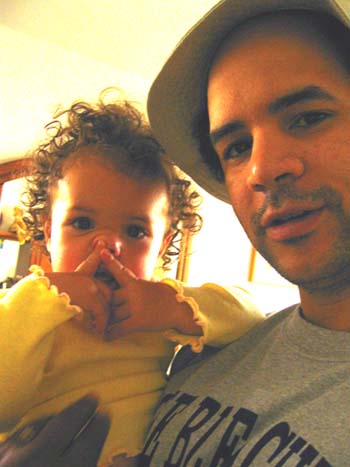 i know how worried you get when you havent heard from me and then see that my blog isnt updated.

but rest assured that if you call and im not home and if you see that i havent written on here that everything is probably ok. probably.

my home computer is still broken so unless i go to chris’s house this weekend this will be the last post till monday, so i figured you’d like a picture of your favorite granddaughter and your favorite son.

things are well out here. it’s warm and sunny. the leaves are just about ready to change. the old lady upstairs sends her regards.

this week karisa and i saw the beastie boys at the universal amphitheater. in a very funny moment i told her that i remembered that we had gone to see eminem and a few tsar shows, but what other concerts had we seen together?

she was all, well, tony,

we flew to san francisco to see U2, we saw kid rock at the universal, we saw zwan at the wiltern, santana at the hollywood bowl, weezer at the long beach arena, the gorilaz at the hollywood paladium, dave pirner at the troubador, beck at the santa barbara bowl, janes addiction at the sb bowl, juliette lewis and the licks at the sunset junction

and then she listed a few more.

i think the smog is getting to me.

karisa has a new roommate, im sure you will be happy to learn. this young lady is a former mormon who rides a motorcycle and works at the hard rock at the universal city walk.

she’s very nice, even if she is a republican. we let that little tidbit slide even though i first met her the night that gw gave his acceptance speech and i was making hella mean comments about him right before her roommate opened the front door.

last week chris and i went to see Hero. i think you would like it. you saw Hidden Dragon Something Tiger. it’s like that, but even better. very beautiful. don’t rent it, see it at the theatre.

chris just got Directv… finally. so on sunday i might be over at her house watching the Bears. they really stink. how are people putting up with that team in chicago? maybe theyre too distracted by the cubs.

theres a very good chance that the cubs will play the dodgers in the playoffs. i hope to see them play here if thats the case. im dumb though and forgot to figure out how to get tickets. jeff from tsar says that getting tix wont be a problem. i didnt ask him what he meant by that.

as you suggested i sent out my resume to some of my favorite companies. it was really scary. but good news: someone super cool wrote me back already and i get to meet with them in a few weeks.

i did this cuz i know how much you dont want me flying chopper one any more.

hope all is well.

i love you very much,

someone in my comments said that he liked it better when i told the truth in this blog.

i can understand that request. but if i wasnt allowed to lie in here i would never have been able to die, like i did in december of 2002…

me and kurt cobain were still in death valley in some sort of pre-heaven state. i had just had sex with twelve beautiful women, played some of my favorite pinball machines, and had a variety of alcoholic beverages. not bad for a guy who was dead.

super pretty woman wearing a veil was standing in a corner. men and women walked up to her and kissed her. some super long kisses, some just little pecks. some of the women would giggle after they were done kissing. but everyone seemed happy, most of all the woman in the veil.

whats up with her? i asked kurt

she likes to kiss.

everyone likes to kiss.

so go kiss her.

but what about germs?

what about, hmmm, what about… morals.

whats morally wrong with kissing? its a nice thing.

yeah, but i dont even know her.

so go talk to her if you want, but she’d rather kiss. in fact she likes it better when you dont talk to her. gives her more of a thrill.

let me ask you something, have you ever flipped off someone while driving on the road, or flamed someone in an email, or shouted at an umpire at a ball game, or wrote a mean letter to a newspaper writer?

well, those are strangers. you dont know them. and you go and do mean things to them and try to hurt their feelings. dont you think thats morally bad?

but they were mean to me first!

so be nice to her… first.

still i was unsure. hesitant. it seemed too good to be true.

kurt could read my mind. he said,

if you cant handle free kisses next to a salsa bar, how are you going to handle the unlimited love of the creator?

unless, of course you’d rather kiss him.

kurt pointed at a bearded man standing in a different corner who winked at me.

whats wrong, havent you ever kissed a guy? 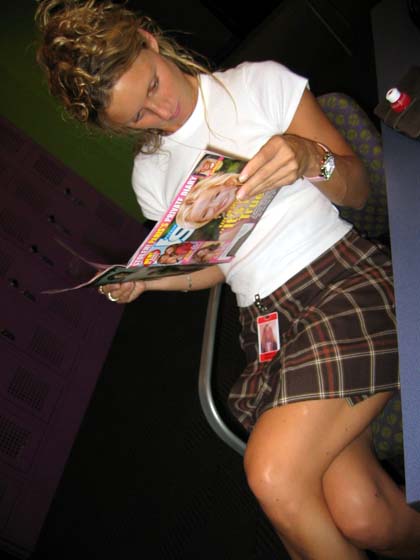 oh my god, i just realized, you havent taken your Shame Shower yet. those girls didnt give you a shower after your romp?

no, they just all fell asleep in a cute little heap.

go to that great glass elevator over there. go to the fourth floor. then come back down here. i’ll wait for ya.

so i walked over to the elevator. there were many buttons. i pressed four, the doors parted, there was steam everywhere, a woman approached me, bowed, she held out a basket and asked me to disrobe.

i looked around, took the basket, walked into the changing room and put my clothes in the basket, borrowed a white robe and slippers and floated back over to the woman who lead me into a very tall steam room. must have been ten stories tall.

please take your robe off

the voice was pleasant.

suddenly dozens of little baby cherubs could be heard giggling. they were far above me. little tiny cute bellies. completely naked. fat little cheeks, fat little arms, tiny little pee-pees and they began to urinate on me.

it wasnt real pee, ladies. it was baby pee. baby angel shame shower pee. smelled like roses. it was freakilly warm though. it shoulda been called the Trust Shower but i had just banged a dozen women and totally chilled with kurt cobain, so i went with it.

those little kids peed on me for a while and when they were done they flew away and the woman re-introduced herself and had two baskets. one basket had my old clothes, the other had a sweet puma sweat suit. dark green. some gold rope chains, and a pair of pearl white suede pumas with fat laces. there was also a diamond sparkling pimp cane.

i chose the basket with my old clothes.

the woman kissed my cheek and said, “live a little,” which was ironic since i was, well, dead.

so i put down the basket of my old clothes and put on the new suit, and strangely, this time, i changed right in front of her. without even thinking.

and when i was done, i gave her a big wet kiss.

and she gave me one right back.

i know that yesterday and the day before was rosh hashanah, maybe today is too, but i was too busy at work to ask what that holiday is all about.

but i do know that whenever theres a jewish holiday here in holiday you are instantly aware how many jewish neighbors we have, because the streets and the busses and the subways are empty.

empty i tell you, and it’s nice.

for example, usually madonna (pictured) is at the hollywood and vine subway station doing yoga poses against the coke machine while waiting for the train, but during this holiday apparently she is in temple.

so in honor of my friends of the jewish faith, especially my buddy jeff solomon and dan kern in tsar, i give you adam sandler’s “Chanukah Song Pt 2”,

for no other reason than he doesnt have a Rosh Hashanah song.

Put on your Yamaka

Its time for Chanukah

Chanukah is the festival of lights

Instead of one day of presents

We get eight crazy nights

When you feel like the only kid in town

Without a Christmas tree

Here’s a new list of people who are Jewish

Then spins a Dreidle with Ralph Lauren and Calvin Klein

Guess who gives and receives

The girls from Veruca Salt and all three Beastie Boys

Lenny Kravitz is half Jewish,

Courtney Love is half too

What a funky bad ass Jew

We got Harvey Keitel

Yasmine Bleeth from Baywatch is Jewish

And yes her boobs are real

Put on that yarmulka

Its time for Chanukah

Still not a Jew

But guess who is,

The guy who does the voice for Scooby Doo

Bob Dylan was born a Jew

but now he’s back,

‘Cause we’re pretty good in the sack.

On the PGA tour

No I’m not talking about Tiger Woods

So many Jews are in the show biz

But my mother thinks he is.

The C is silent in Chanukah

So read your hooked on phonica

If you really really wannaka

face to face, house of blues

the pixies, the greek