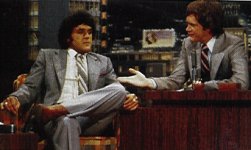 the peacock announced today that theres good news and bad news regarding the tonight show.

and that is that not only is jay leno going to stop doing the tonight show in five years, 2009, which really looks like forever on paper, but it’s not, thank the lord it’s not

but also that conan o’brien will replace him.

we had to suffer for so long, and for some reason all i see is the grateful dead skeleton guy tipping his red white and blue striped top hat.

compounded by the sad fact that it should have been letterman’s natural victory lap.

but as we’ve said over and over in the busblog, life isnt fair.

almost exactly a year ago i had a plan for cbs and dave that included conan, but nobody ever listens to me.

and now their only hope is bringing back the midnight special starring me and karisa live from the rainbow.

i watched a little of the tonight show’s 50th anniversary and heard jay announce this very good news and alluded to the fact that he and dave dont talk any more, etc

and i was all you little prick, i dont remember johnny having you on 40 times when no one knew you.

but ultimately it’s on johnny, in the only unclassy thing he ever did.

something that not only did not secure him his rightful place atop the late night throne, but spoiled a lot of the magic around it.

so yes its great news for conan. pushing the limits and creativity should always be rewarded, and if it couldnt be dave, im glad that it’s conan. it sucks that it couldnt have been both though.

it’s hard not to keep mentioning that.

and yes sometimes i dream about having a cable access television show.

with raymi as my ed mcmahon.

and after i do something great on the show, or say something funny, i would let the audience recover, stretch my arm out, and say and now, green day!

well last monday, a week ago, your next president was on the late show. and dave interviewed him and then had him read off the top ten list.

and when he was done, i swear to you, they went to commercial, came back, and dave asked

is the election going to be close

do you have a prediction

i have a prediction that im going to win

we’ll be back with green day.

and i always wondered what happens when your dreams come true

i’ll have to ask dave how mine was.

got off the phone with the second hottest girl in america, karisa j moonshine, who just accepted a job promotion and deserves a round of applause and congratulations, and we were discussing our two baseball organizations hers being the boston red sox and mine of course being your chicago cubs.

the sox have just clinched a playoff spot and i was telling her how bad pedros jerri curl was doing under the onslaught of cheap champagne, and she was saying how excited she was to be back in the playoffs and ready to take another shot at it.

and i was all, i’d rather the cubs didn’t even make it to the playoffs if they weren’t going to win it all. i take it so personally, i told her. she said, i do too, i was all i will seriously cry again.

and she just giggled explaining how they had been used to saying wait till next year in her home land of new england.

the cubs didn’t do so well this weekend in new york city. they lost two of their three games at shea and were far from impressive the week before that.

but nobody this year seems to want to win the wild card in the national league and the cubs are so quietly stacked, it’s nearly impossible for them to fuck this up.

so today thanks to three-hit games from former red sox infielders nomar garciapara and todd walker, the cubs routed the reds 12-5 at wrigley.

this gave the cubs a full game atop the national league wild card standings.

while kissing a new young woman all day yesterday she asked, you keep talking about this wild card in baseball, wtf is a wild card.

chick had just turned twenty one. held my stubbly head in her hands as we made out. kept jumping up to change the cd player back to her favorite song.

mandy moores, have a little faith in me.

not the prettiest girl in class, but lets face it im no catch, but whatever, shes moving back to milan in the morning.

what’s italian for please take me with you.

after a while i said, there are three divisions in each league in baseball. the winners of each division get to go to the playoffs. but you can’t have playoffs with just three teams, so to make it an even four teams, they need one more team. so of all the other teams they pick the one with the best record who didn’t win their division, and that team is the wild card.

the red sox today clinched at least the wild card slot in the american league.

the giants and cubs are vying for the national league wild card spot.

the giants actually have just as good a chance of winning the division if the dodgers keep spazzing out.

as they gave me hope

which we all know is brightest

many bloggers took it, some did not. i’m not going to say that they were dishonest, but hopefully they thought to themselves “why am i being a chickenshit and not revealing who i really am?”

my advice to you, dear reader, don’t trust bloggers who condem others for not being truthful if they cannot be truthful themselves.

if you have a favorite blogger that you regularilly read, ask him or her to take this quiz so that you can discover where they stand on the issues.

these are the questions, and what follows are my answers. if you want to add your answers in the comments, be my guest!

1. which political party do you typically agree with? green

2. which political party do you typically vote for? democrat

4. which party do you think is smarter about the economy? democrat

5. which party do you think is smarter about domestic affairs? democrat

7. who, or what country, do you think is most responsible for 9/11? obl and the saudis.

8. do you think we will find weapons of mass destruction in iraq? yes, ours.

9. yes or no, should the u.s. legalize marijuana? hell yes.

10. do you think the republicans stole the last presidental election? yep.

11. do you think bill clinton should have been impeached because of what he did with monica lewinski? no.

12. do you think hillary clinton would make a good president? yes.

13. name a current democrat who would make a great president: hillary

14. name a current republican who would make a great president: mccain

15. do you think that women should have the right to have an abortion? yes.

16. what religion are you? Christian.

17. have you read the Bible all the way through? yes.

19. who is your favorite band? tsar

20. who do you think you’ll vote for president in the next election? Kerry.

21. what website did you see this on first? tonypierce.com + busblog

for some good reasons they are moving some people around. for some very bad reasons they are moving some other people around. at 110 years old i dont freak out about these things any more. annoying as they might be at 9:30am on monday morning when all you want to do is blog about the wild weekend that youve had, all the cheerleaders youve kissed and all the famous libras who were born on this day.

i would also like to write about how in the comments section of jeff jarvis’s buzzmachine (i know, i know) mr instapundit himself tried to defend his “moderate” facade, to which another commentor defended him,

to which i asked there and i will ask here:

if anyone can show me one day in the Instapundit’s illustrious career, where he spent one day spending more time criticising the Bush administration more than attacking the left

otherwise jarvis himself should call a little bullshhit on his buddy the blogfather.

of course glenn is a tool cheerleader for the right, who are we kidding?

one of the people who got booted out of our department was my buddy travis k smiley who was banished to a new land that was integrated with two others.

i am not one to monday morning quarterback. i have said all along that the department that i still reside in and the one that travis k was once part of was a horribly intense place of incredibly busy and hard working people who are all too good of souls to be forced into the gunk they must wade through to collect a paycheck.

youd think that i would be happy to break up such a flawed system. problem is, this part of the system isnt flawed. the jobs suck, but we handle them. we handle them with so few errors that when we do make an error all hell breaks loose.

can you imagine what it must be like to know Every mistake you and your department has made in the last 3 months? it happens that rarely.

which is why it should stay as is.

just give us hella raises.

instead im sitting here with only part of my crew.