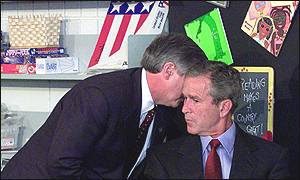 First thing I’d do is make 9/11 a national holiday. It’s a no-brainer.

A holiday that actually mattered.

Tomorrow I will sit in front of my tv and watch every 9/11 documentary that comes across my big screen. I will remember, I will speculate, I will dive into the heart of darkness, I will cry my eyes out.

To me, that’s what a holiday is supposed to be about.

What happened on 9/11 was important to the United States in that we realized that we are no longer isolated from that sort of madness of the world.

There was a time that we could hide out here in North America in our ignorant bliss. We could sit back and ignore the suicide/homicide bombers in the middle east.

Little did we know that they could come to the land of the free and fuck our shit up.

How naive we were.

Tomorrow’s should-be holiday would be a great time to think about how much of our innocence was lost with our ignorance. Do we live in fear now? No. Should we? Hell no.

How can we make it so that the terrorists stop winning?

They have won, of course. We know this because we see the RNC convention in NY and not Texas or DC, but in the city that Osama hit. We know they won because we haven’t gotten our vengence out on Osama.

We know that they are winning when we it takes us two hours to board a plane to fly for one hour, or when we can no longer bring day packs into baseball games, or when we look at the record-breaking deficit that we now find ourselves in.

Admiting that the enemy is winning isnt admitting defeat, it’s merely facing facts. The terrorists will not win forever. At some point someone will stand up and know how to fight these guys and/or negotiate to a point with them.

I might be as naive as we were pre-9/11, but I do not buy the exact same crap that I was fed as a lad that these terrorists are the same as the commies of the cold war in that they hate us because of our freedom and our mcdonalds and our heathen Christian way of life.

I do get it that some people hate us because of what we represent, but it still doesn’t make sense to me that someone would kamikazee themselves into a building filled with innocent people to damage an image.

There’s a lot to think about tomorrow.

As President I would hope that each 9/11 we would mourn our lost innocence/ignorance and try to develop relationships that would foster peace.

Sorry that it would be a holiday so close to Labor Day, but I think this nation would understand.