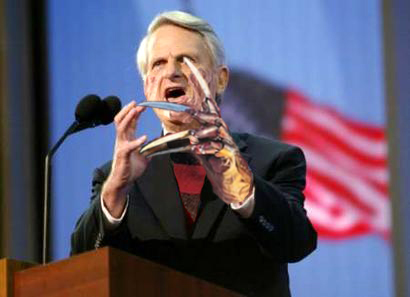 Claim: Senator John Kerry “voted to kill every military appropriation for the development and deployment of every weapons systems since 1988.”

HE says he is strongest

He said Check the Record..

Here is what we learned.

He voted to kill the B-1 Bomber

He voted to kill the B-2 Stealth Bomber

He voted to kill the F-15 Strike Eagle

He voted to kill the AH-64 Apache Helicopter

He voted to kill the Patriot Anti-Missile System

He voted to kill the Aegis Anti-Aircraft System

He voted to kill the Trident Missile System

He voted to kill the M-1 Abrams Tank

He voted to kill the Bradley Fighting Vehicle

He voted to kill the Tomahawk Cruise Missile

In short, he voted to kill every military appropriation for the development and deployment of every weapons systems since 1988 to include the battle armor for our troops. With Kerry as president our Army will be made up of naked men running around with sticks and clubs.

our boy Zell quoted this almost word for word changing pretty much nothing except for the last line replacing “sticks and clubs” with Spitballs.

Snopes goes on to write that there are many reasons to vote against a bill, let alone the three bills that Kerry voted against that included those weapons.

And then they remind us that Dubya’s daddy spoke out against certain weapons in his ’92 state of the union speech.

Two years ago, I began planning cuts in military spending that reflected the changes of the new era. But now, this year, with imperial communism gone, that process can be accelerated. Tonight I can tell you of dramatic changes in our strategic nuclear force. These are actions we are taking on our own because they are the right thing to do. After completing 20 planes for which we have begun procurement, we will shut down further production of the B-2 bombers. We will cancel the small ICBM program. We will cease production of new warheads for our sea-based ballistic missiles. We will stop all new production of the Peacekeeper missile. And we will not purchase any more advanced cruise missiles

ah lovely internet. how were people able to fact check other peoples asses before ye?

think the biggest political bloggers in the blogosphere will touch this one? why would they? they got their alleged bounce. they had a dem do their dirty work against the purple heart winner, and then kicked him to the curb like a bitch. which is no way to treat a guy who just gave your keynote speech, but class isnt really what this administration is about.

and fairness and integrity isnt what gets you 6 million hits a month.

dirt does baby, dirt on your “opponent”.

the truth is for bleeding heart hippies more in love with losing honorably than winning.

plus zell miller to ‘pundits is so last week’s empty beer cans.