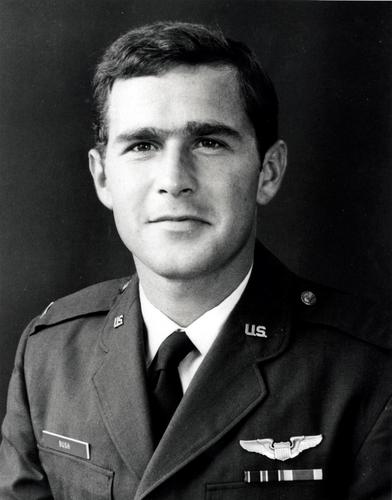 why do you hate america so much?

i have protected you, i have brought back the economy, i have rid iraq of saddam, and i even kept howard stern on the air

to be honest i dont find myself reading very much. but i do like pictures that you put on your blog and the other day i saw that picture you put up comparing my medals with senator kerry’s medals, and the colors were very pretty.

but why did you have to echo the daily kos and the democratic underground? you rip the instapundit for linking drudge and you link the DU?

and then you posted it on metafilter?

i dont care that the Air Force is now confirming that it’s true, that one of those medals i’m wearing in the picture is not mine.

you think anyone is gonna give a rats ass that i wore a medal that i didnt earn? they didnt care when i stole the election did they? they didnt give a fuck when i didnt find any wmd’s or osama.

they didnt care when i redacted 28 pages from the first 9/11 report about the saudis and how they funded the terrorists, they didnt care that i tried to stop condi from testifying to the commission,

shit motherfucker they didnt care the other day when i said the war was unwinable and they really didnt give a fuck when i flip flopped the next day and said it was totally winable.

you know why glenn reynolds called the mainstream media “biased — and strongly in favor of a Democrat” yesterday in the wall street journal? not because they attack me and are always on my ass, no, thats a republican trait

he called them “lazy” because it’s true, they Are all a bunch of pot smoking hippies too unmotivated to get off their peace loving commie asses and challenge me on something. Anything.

i could snort a line of blow off oprahs fat ass on national tv and those slackers wouldnt say boo.

and if one of those mumbling homos did say anything i would just say blahblahblah and theyd shut the fuck up like the bitches they are and you know what: good. quit getting in the way of freedom, fucking longhairs.

every now and then someone will stand up and say what about gay marriage?

and im so tempted to say how the fuck could you listen to phish but instead i say blahblah and they sit back down like good little boys and girls.

i dont give press conferences tony not because im afraid i will fuck up, but because theyre so very dull and tedious and troublesome.

thats why theyre rarely televised. america fucking hates them too.

zell miller could teach you an awful lot, my friend. zell co-sponsored both of my tax cuts for the rich, swore not to run again for senate as a democrat,

and said he’d back me for president back in october of last year way back when there were still nine other democrats running for the nomination and howard dean was still in the lead.

he even went on the Sean Hannity show and called them “the naive nine” of whom he didnt trust any.

this was when he was out hawking his book knocking the democratic party, the one where he called the at-the-time front-running howard dean “shallow.”

well, after last night’s unbelievable speech, he got on chris matthews show and not only talked a good game but threatend to kick matthews’s ass like 3-4 times, ending it with wishing that he lived in the days where you could duel another man.

heres the video if you dont believe me.

which you never do.

and that hurts me a little, inside, too.

zell’s hurt me in the past. in march of 2002, just three years ago he introduced sen. kerry at dinner and called Kerry a great leader who “worked to strengthen our military, boost the economy and protect the environment.”

miller even called kerry “one of this nation’s authentic heroes.”

it’s a speech that i have politely asked him to remove from his official web site, but he refuses.

as you say, whatev, none of you pansies will care about this either.

nor will you care that in 1992 at a different convention, the democrat convention, miller was just as animated, just as earnest, and just as lively about how people should vote against my pappy, but for bill clinton.

it was during that speech that i said to myself, if only i could get a guy like that to speak for me one day.

and now i get to do some speeching of my own.

i recommend that you do like americas newest favorite great grampa zell miller and get in line.

nothing the terrorists like better than loose lipped liberals making this great great country look soft and divided.

i call upon you tony pierce to stop hating on me and calling me retarded.

i call upon you to ask yourself if youre getting more hits today than you were four years ago.

and i call upon all nations to do everything they can to stop these terrorist killers.

now watch me hit this drive.

incredibly the instapundit “changed channels” before zell challenged matthews to the duel and flipped back, therefore has no comment on the meltdown

+ matt welch said of the miller moment “I found myself thinking that this was the most frightening political speech I had ever seen in my life. I don’t think I’ve ever been as uncomfortable at a political rally.