we here in Cali dont play.

if you lose to the pistons in the finals we’ll fire the greatest coach of all time and the best center in the league.

if you are winning the late night talk show wars but you suck, you’ll get a 5-year pink slip.

and if a simi valley court rules that the cops who gang-beat rodney king are not guilty we will burn down simi valley south central.

nine years ago we voted for the Three Strikes law that said if you commit three felonies you will go to jail for 25 years to life.

crime has gone down in california but not everyone is sold that its because of three strikes.

if hitchcock were still around i could see him making a film of a guy who gets involved in a barfight who punches the wrong guy and gets convicted for battery (one strike). maybe a few years later he’s doing a line in the bathroom of a club and a cop who finds a tiny amount of cocaine on him, thats two strikes. lets say a few years later he gets a dui – there is a huge probability that he will go to jail for at least 25 years and maybe life. 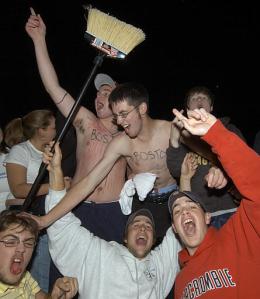 heres a real life example: a few years back when i lived in frisco i was on a jury.

a guy saw two teenagers going door-to-door selling newspaper subscriptions. one of the kids had a shiny 49ers jacket. the guy grabbed one of the kids and stole his jacket.

when the case went to trial, we jurors thought (even though we werent supposed to) “what the hell is this doing in court? fine the jerk and put him in the hole for a few months.”

but we all collectively (unspoken) assumed that this was the guy’s third strike.

so all of us sat in that room and thought “are we going to give this bully 25 years to LIFE for being a dumbass?”

even though we all knew he probably did it.

if it werent for three strikes we would have easilly convicted him and gone on our way. but because we knew we might have sent a man to life in prison over a dumbass niners jacket we let him go.

because of that i am going to vote for Proposition 66, which will reform the three strikes law which the OC Reg says “would reserve enhanced sentencing for serious or violent felonies, and it narrows the definition of serious felonies to exclude attempted burglary, burglary of an unoccupied residence (though not when someone is home), conspiracy to commit assault and a few others. It enhances sentencing for sex offenses against children. And it would allow current “third strikers” convicted of nonviolent or nonserious crimes a rehearing, after which their sentence could be reduced or they could be released.”

sounds much better to me.

lithium journals has a great new redesign + zulieka has a new nude self portrait + her ex just made a blog hating on her, but only makes her sound more appealing