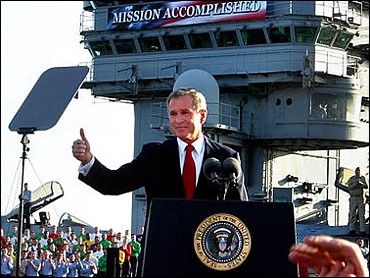 was put up by the members of the USS Abraham Lincoln, saying that their mission was accomplished,”

President Bush said last year, distancing himself and his administration from the controversal sign that hung high on the aircraft carrier May 1,2003.

or the Waterloo, Iowa sign that the president used today in the heartland like it wasnt any big deal what so ever.

it wouldnt be a big deal if the administration really has nothing to do with the mission accomplished sign.

it wouldnt be a big deal if once again the bush administration has been caught straight up lying about not little things, but big things, war shit, and now propaganda shit. 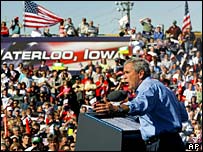 by using the same style sign and design for the banner today in iowa the president’s people are saying, those dumbfucks chewing on their own cud wont notice shit, they havent seemed to notice shit so far

the graphics are identical with the Mission Accomplished sign that the president originally swore was the doing of those of the USS Lincoln,

plus the type set is nearly the same.

what’s peculiar is during the original controversy regarding the sign on the Lincoln, the administration first said that the seamen had put the sign up, and the president had nothing to do with it.

but then when they were pressed they said

oh you mean that mission accomplished sign, oh yeah, that was done by an outside company:

apparently that same private vendor who no one knows is continuing to make the Bush signs.

you’d think that after all the flap about the original sign they’d change the design and/or typset but never one to appear to be flipping or flopping, the president and his people have stood firm on these placards ignoring any immediate recognition that the average american would make with the original.