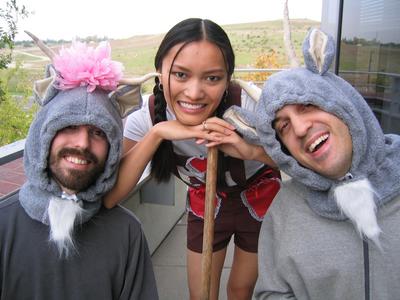 i have dressed up as a gangmemeber.

which isnt much of a stretch since i normally dress up as one anyhow.

i even found a gold tooth to make it festive.

i was gonna wear a bandanna, but if chopper one crashed in the wrong part of town i could be a dead man.

kimmy jason and graham of blogger/google dressed up beautifully (above) and if you want to link to pics of you & your workmates in their outfits in the comments of this post feel free.

ive worked at other places where dressing up in costumes on halloween was a much bigger deal than here at the xbi where we’re undercover for a living.

for example who can forget when karisa & our pals dressed up at the dot com many moons ago.

or the time karisa dressed up as that chick from scooby-do?

last night karisa asked what she should be this year and i said a Raiderette.

being from new england she gave me an As If look

but when i reminded her that the Raiderettes had far better uniforms than the NE Pattys she changed the subject, conveniently.

only reason im even here today is for the candy.

and the catholic schoolgirl runaways

although i just saw some mexican wrestlers who looked pretty funny.

and john woo as the lead singer from gwar.