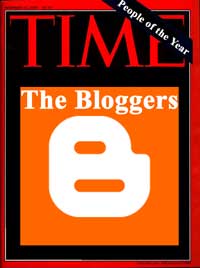 will become the Time Person of the Year.

if thats the case then i will hang up my keyboard.

bloggers and blogging have taken a small step for mankind this year but they aren’t worthy of any such accolade.

sure a few right wing blogs made some trouble for dan rather, but given a few days real journalists would have made him aware of his misinformation.

if anything the rightwing bloggers should get some sort of award for walking around like Nothing went wrong in the Bush whitehouse these last four years, but it shouldn’t be person of the year.

sad truth of the matter is that neither bloggers or michael moore or even osama bin ladin (two far better noms for the Time award) changed the results of the election this month. bush won all the same states that he won last time and the dems won all the same ones that they won last time.

sorry but if im in charge of giving out awards i dont hand them out to people who made no difference.

if i was running Time there would be only one person that i would give the award to: Theo Epstein, boywonder and General Manager of the Boston Red Sox

who was able to recover from bungling the A-Rod for Nomah trade and not only win the world series without either star but beat the yankees in classic form.

yes the Red Sox winning their first world series in 86 years and reversing the curse can be trumped by no one.

not even those of us who tap tap tap in the darkness in our pajamas.

i want her drunk. i want her doped up. i want her having to get pulled away from the cameras. skinny or fat doesnt concern me, i want her exactly the way she is. i want there to be violence and bloodshed at the Vibe awards. i want there to be stabbings. i want Dr. Dre involved. not the fat one who’s pal is ed lover, but the wessssside dre, em’s dre, snoops dre. the one who started this gangsta shit. and i want the other guy to leave the award show injured, not the former nwa producer. i want liza minnelli to be sued by her former bodyguard for allegedly beating him and forcing him to have sex with her. any bodyguard who can be basically raped by liza minnelli deserves to be raped by liza minnelli. i want more stories like this. i want britney spears setting new lows for white trash behavior. i want her writing cheesy poems and posting it on her web site. i want gorrila mask to make ruthless fun of her. i dont want dont bring your guns to work day. i want more guns in the workplace. i want the stars of desperate housewives to look like desperate pornstars. i want people who voted against gay marriages to know that teens with same-sex parents are just as fucked up as anyone else, meaning theyre normal. i want to turn on the radio in the morning to howard stern and hear jeff jarvis on there telling him that he’s got the fcc on the run. i want more people lighting themselves on fire in front of the whitehouse. i want spongebob squarepants to sing we are family with barney. and then i want them to sixty nine each other. and then i want gwar to torch the whole thing. while tsar plays and spike jonze films it. and after i want to roast dodgerdogs on the remains and wash it down with makers mark. anti + sk smith + bunny mc

it all started when colin powell resigned. he was the first black u.s. secretary of state, the most senior cabinet member.

powell was also this country’s best diplomat. respected for his military background but loved for his rational moderate positions on touchy subjects, powell was often at odds with the president and vice president.

when he wasnt towing the company line of fear/terror/wmd (“The gravity of this moment is matched by the gravity of the threat that Iraq’s weapons of mass destruction pose to the world“) he was speaking his mind truthfully.

perhaps you remember when he was asked on an MTV interview about his opinion about the Catholic Church’s stance against condom use:

“I respect the views of the Holy Father and the Catholic Church, but in my judgment, condoms are a way to prevent infection, and therefore I not only support their use, I encourage their use among people who are sexually active and need to protect themselves.”

or maybe you recall when powell told the washington post that he did not know whether he would have recommended the iraq invasion if he knew that there were no wmds.

“I don’t know, because it was the stockpile that presented the final little piece that made it more of a real and present danger and threat to the region and to the world,” he said. “(the) absence of a stockpile changes the political calculus; it changes the answer you get.”

and how could you forget when he told the president about the you-break-it you-own-it “pottery barn rule” regarding what will happen if he was wrong about invading iraq?

“You are going to be the proud owner of 25 million people,” Mr. Powell is said to have told Mr. Bush in the summer of 2002, the nyt reported. “You will own all their hopes, aspirations and problems. You’ll own it all.”

powell wasnt always the clear-thinking humanitarian, more than a decade ago before the gulf war, he was joint cheif of staff and sent a letter to saddam that he quoted in his book my american journey

and then he proceeded to oversee the bombing of the iraqi water supply (allegedly) and the highway of death where thousands of retreating surrendering iraqi troops on their way out of kuwait were massacred.

maybe it was that experience and the time that he lied about the iran/contra coverup that kept him wincing during every faulty move within our current war which has been filled with human rights abuses, lies, coverups, and failure.

and maybe thats why he’s tapping out now. while he still has a little dignity left. somehow.

the story of colin powell and this last chapter – his turbulent relationship with george w. bush – further adds to the ever-growing list of burned bridges and missed opportunities of this failed administration.

which is exactly why the instapundit pretty much blew it off yesterday within his 32 posts.

none of which mentioned that three other cabinet members resigned yesterday adding the fallout to 6 of 16 cabinet members quitting before having to endure a second term with bush.

tom brokaw being booed at an oklahoma football game: 1

ive often said that you can learn more about how republicans feel about the news by what glenn doesnt write about than what he does.

martin shram once once wrote: “Three years ago, The General rode into Foggy Bottom on a white horse. Today he’s riding a weasel.”

looks like bush is on his way to another gloomy inauguration