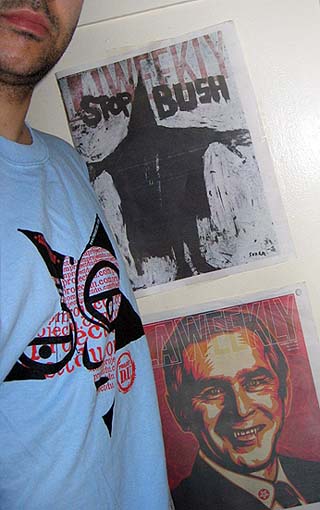 “Have you considered my servant Job? There is no one on earth like him; he is blameless and upright, a man who fears God and shuns evil.” – job 1:8

but only if we could only talk about the bible for an hour.

millions of americans allegedly voted for mr bush because he claims to be Christian and it’s not like im saying hes not, i would just like to find out what sort of Christian he sees himself as. cuz theres lots of different kinds.

the first passage i would want to talk with him about is in Job, one of the most universally loved and told tales from the good book.

i would ask the president what he thinks of the book of job and ask him if he sees any similarities between himself and the character job.

after we talked about that for a few minutes i would ask him if he felt that he was blameless. not as a loaded question cuz thats not nice, but as a real question.

i know im not blameless, which in a way, if you think about it is good because the lord would never present me to satan and say, heres tone: perfect, great, blameless – fuck with his life and i bet you he still loves Me when youre done.

it’s not that im afraid that i wouldnt always remain faithful to the lord, i just wouldnt want to live with boils to prove it. i have enough problems.

but in a way our president acts blameless about pretty much everything and i would be curious to see if he thinks he is.

if i was mr bush i would have no fear right now. id be honest to tony pierce. why not?

in many peoples minds he could not have done worse in his first term – from ignoring the 8/6/01 pdr entitled bin laden determined to strike inside the us, to not finding bin laden, to not finding wmd, to creating the largest deficit ever, etc etc – which means unless he literally started acting like hitler, he can only do better this next term.

plus whos gonna beat mccain in 08? no one.

even four more years of the tard isnt going to hurt mccain.

so if i was george bush i would be brutally honest with people. id have no fear. if i thought i was blameless id say im fuckin blameless g.

or i would say, yeah we blew it, but it wont happen again. and we are sorry. please forgive us.

and then i would have mr bush rank the evil of the world. that would probably be helpful. and again, what does he have to lose?

i would say ok, obviously afghanistan and iraq rank 10 on the scale of evil because we went in there and had war.

are there any countries in africa a 9?

isnt ashcrofts terror alert dealie a way for the government to let the public know how things are going? then why not colors for individual countries?

canada i would imagine would be a green, but what about iran?

as a Christian i want to shun evil. as president dont you want us to know where this evil is?

and then finally i would ask the president to discuss with me the fine line between divine intervention and free will, cuz i think that gray area is fascinating.

and im pretty sure he’d agree

unless he knows something that he hasnt told us about yet.

in which case i hope he gives me the exclusive.

and if he does, you’ll be the first to know.