right before the civil war.

and knucklehead who just got reelected, i think we can all agree, aint no abe lincoln. so, in a way, we’re fucked and headed for some nasty times.

now, to be honest, and you know we keep things real on the busblog… but i couldn’t give a fuck the red states.

and im sure they could just as easily say, you know what, fuck the blue states right back.

which is exactly what the terrorists want us to do.

whoever the fuck they are.

which is another symptom of our national imbalance.

so i think we should agree to disagree as a nation on some major points before shit goes down, not because im afraid of any of you redsters, i just have enough shit to deal with without having to worry about the annoyance of a second civil war.

which is probably a little overdue, but whatever.

what will solve it is The Great 2005 Compromise 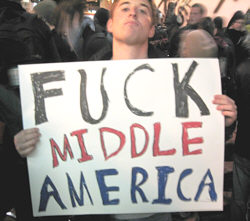 first we need to agree that jesusland shouldn’t happen. cali and oregon and washington and the big ten and the northeast shouldn’t join up with canada.

next we need to give states some powers that they dont have right now.

let the states who dont want gay marriages to not have to perform them, but they must acknowledge them in the same way that they currently recognize marriages from other states, or even countries.

in return the blue states need allow the red majority up to two wars a year. as long as they come in under budget. yes there should be a war budget and those monies need to be collected before said war(s).

if they are then no one in america can be allowed to talk any shit, especially in the press.

meanwhile the red states need to allow the blue states to grow sell and use marijuana. not just medical weed, all weed. a man shouldn’t have to be terminal to have a legal high. and if the red states dont want to join in, fine. but where do you think youre getting the tax revenues for your two wars a year – pot tax – so lightem if you got em.

in return abortion can be illegal in all cities with less than 500,000 people. if you look at the map, most of the people who vote blue live in big cities. they are also the ones who want a woman to have the right to choose. if someone from the suburbs or from a state with no big cities wants an abortion, she can get a ride or take the bus to the nearest city and get it handled there.

if a non-profit or philanthropist wants to donate a bus ticket to planned parenthood who will arrange for safe transport of the woman, then fine. but roe v wade needs to be protected. you get your wars, we get to have abortions if we need them.

also you get to keep bush jr in office. you say you like him, odds are in the next six months hes going to do more stupid things, the blue states should agree not to impeach his ass for one of the many fucked up things hes responsible for.

in return there needs to be supreme court reform. this wackiness where a president could pack the court with four new judges that match his ideals is… well… partisan. and wasn’t the whole purpose of the courts that they were impartial? well that doesn’t seem to be working out so well, so let the dnc pick four and let the rnc pick four. let the people approve the nominees until there are four from each of the two parties.

and finally, voting should take place over a period of three days. there shouldn’t be any need for paper ballots or long lines. theres a lot of unemployed people these days, for a few of them to have a week’s work for something as important as an election is a good iea.

the fourth day will be National Ballot Counting Day. cuz seriously, whats the rush? i want a fair and accurate count. no need to do it in the middle of the night with the manmade pressure of network cameras all up in their grill, allow one full day to count the votes and on friday at twelve noon eastern time, the results will be read aloud and people can accept or concede. and you should be forced to show ID when you vote. i wasnt asked for my ID and neither were a lot of people i know. thats silly.

not everyone is going to like what the “other” side is getting but thats all part of the compromise. its about tough choices and tolerance.

and courage and trust in your fellow american.

its a real compromise where people who live where they do can live the lives that they want to and those who disagree can live their lives without retribution or ridicule.

which is what this fine land was founded on.

that and giving the finger to the oppressor

so lets make this happen before it gets uglier.

virginia + no matt + i am a slampig + photos from the instapundit