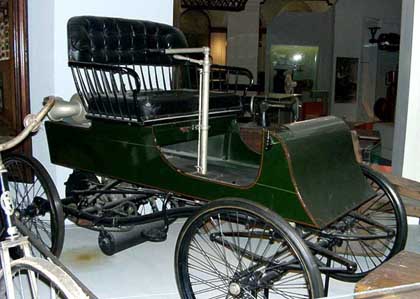 On this day, the first gasoline-powered Pierce automobile was taken on a test drive through the streets of Buffalo, New York.

George N. Pierce first founded the Pierce Company in 1878 as a manufacturer of household items, but in the late nineteenth century shifted to bicycle production. Pierce bicycles became known for their high quality, and after achieving a substantial capital base, Pierce and his company decided to try their hand in automobile production. The first few Pierce prototypes involved steam power, but in 1900 the designers shifted to gasoline engines.

The first production Pierce, test driven on this day, featured a modified one-cylinder deDion engine capable of producing nearly three horsepower. The automobile would be christened the Pierce Motorette, and between 1901 and 1903 roughly 170 Pierce Motorettes were made.

In 1903, Pierce began manufacturing its own engines, and later in the year, the Pierce Arrow was introduced, followed by the Pierce Great Arrow in 1904. By 1905, the George N. Pierce Company was producing some of the biggest and most expensive automobiles in America, with prices in excess of $5,000.

In 1908, the Pierce-Arrow Motor Car Company was officially launched, and in 1909 U.S. president William Howard Taft ordered two of the prestigious automobiles, a Brougham and a Landaulette, for use by the White House.