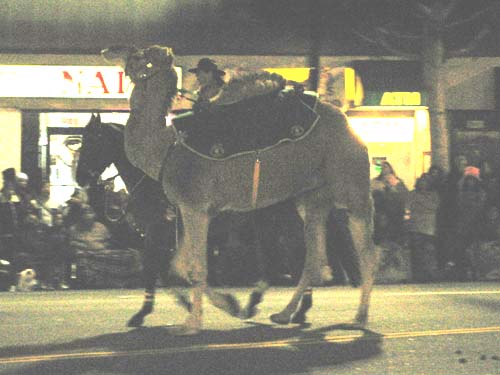 god bless trio who this weekend showed us kurt n courtney, biggie and tupac, and now wilcos i am trying to break your heart.

karisa got me out of the house. we met at hollywood and vine and walked up a few blocks and saw the hollywood christmas parade. probably the most ghetto parade you’ll ever see.

not a-list stars, not even b-list stars, but so c-list that the simpsons and spongebob square pants got the biggest applause.

although george lopez got an impressive hand where we were standing.

if everything goes right.

brad garrett from everyone loves raymond was in the parade. everyone was riding around in super cheesy floats or in super old timey convertibles.

so he was up there. his little 7 year old daughter was next to him, and his wife was on the other end.

hes waving at the people and then you realize that he was trying to get the cotton candy man’s attention. he finally does and the man walks over to the moving car, and brad garrett starts buying bags of cotton candy and throws them into the suddenly frenzied crowd.

if i listened to kcrw im afraid i would get old too.

103.1 has to mix up the songs better. and they have to tell us what the hell we heard more. enoughs enough.

just a pinch is all im asking for.

it was freezing out there on hollywood blvd and they had a camel.

camel didnt wanna be in the hollywood christmas parade and neither did the sherrif who was keeping a short leash on it. the sherrif was riding a horse right next to the camel.

and the camel kicked with its hind legs and bent its neck all funny. but it wasnt funny.

and then we watched to see if the bands would step in it.

and there was this one band from ohio. lots of bands from all over the usa were invited to play and they all showed up. but this one from ohio didnt see the piles right there in the middle of the street.

and when the trombonist felt something funny

you dont get that shit in ohio.