i dont care how much money you’ll save.

winning the world series is not about saving money.

winning the world series is about having the best team on the field.

sammy sosa had his worst year last year in a very long time.

nobody has hit more homers than sammy in the last decade.

sammy is arguably the cubs greatest player ever.

the year before that he was hurt and only played 58 games.

he was hurt recently because of a broken foot.

the cubs want more speed so they trade sammy sosa for a guy with a broken foot?

the cubs will also pay the orioles $10 million to cover most of sammy’s $17 mil contract. saving chicago $7 mil, which they will prossibly use to trade for and sign tampa bay’s aubry huff who will make about $6 mil this year.

the cub reporter speculates that the cubs will trade either one of those prospects and some of their own to tampa bay for huff. 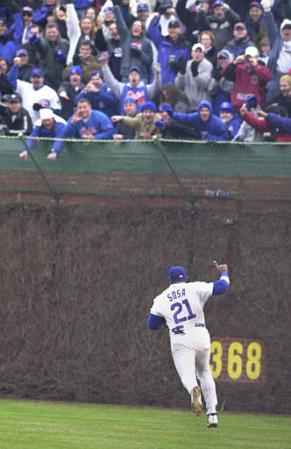 all i know is sammy is the best cub player ever, and if youre going to send him away, you get something back.

ernie and billy and ryno were all great, but sammy was a monster for over 10 years straight.

he was never busted for steriods despite the whispers

and although the corked bat incident was probably the most embarrassing moment ive ever seen, the likelihood that it truly was an accident remains good.

yes he was booed near the end of the season last year and showed up late for the last game, didnt play, and left the game early.

sure-bet hall of famers and their pride, and all that.

me, i blame dusty baker, who has been given solid teams and the best pitching in baseball and hasnt given me a world series.

i refuse to believe that managing barry bonds’ ego was less difficult than sammy sosas.

i know its blasphemy for anyone to ever criticize dusty baker, but wheres his ring as a manager?

didnt he have 4 guys with over 30 hrs on his team last year, and a lead-off hitter who nailed 25?

didnt he have proir and wood and only one game to win versus the fish two years ago to get to the world series?

and now am i to believe that now he’s going to recommend that the cubs trade away the cubs greatest player for jr. and maybe aubry huff?

fuck the tribune corp who owns the cubs and is behind all of this tragedy.

when will there be manditory drug tests for owners

andy dolan + aaron’s baseball blog + a view from the bleachers