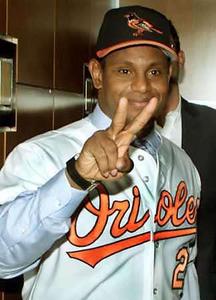 So Sammy Sosa has taken his 133 strikeouts with him to Baltimore.

And the Cubs replace him with free-swinging Jeromy Burnitz, who struck out 124 times in 2004 with the Colorado Rockies.

Were the Cubs watching when Burnitz faced them last season? Here’s how he fared: 3-for-23, all singles, with two RBIs and six strikeouts.

Baseballreference.com posts similarity scores on all player pages. They are based on stats guru Bill James’ methodology. Here are a few of the players listed with Burnitz: Jay Buhner, Jesse Barfield and Danny Tartabull.

Sounds like a swing and a miss to me.