This morning I received an email from the good MC which was sent to him by a woman who recently met Dr. Hunter S. Thompson.

this is the email that she sent Marc:

When we got to the door there was a wooden plaque that said “Nobody Gets in To See The Wizard Not Nobody, Not Nohow.” I could not have wished for a better entry sign. After all this time, that was exactly how I felt.

Tammy knocked once, no answer. She knocked again and this time a woman’s voice asked who was there. Tammy explained who we were and heather escorted us in the house. The xmas tree and lights were still up, but that did not seem uncommon in woody creek. I remember thinking the carpeting was really red in the room we entered thru. The walls were paneled and they were covered with paintings, posters and tchotchkes. We transitioned to the kitchen via a red and black marble floor.

Hunter sat in the corner of the kitchen, his computer and countertop directly in front of him. Glasses of beer, orange juice and vodka were respectively lined up to his left surrounded by several bottles of prescription meds. He held a pipe in his hand and spent the next 20 minutes picking imaginary tobacco from his lip, the pipe bowl and the mouthpiece. He wore striped pants, a vertically striped shirt with a white shirt covered in palm trees over that.

He asked what our project was all about and tammy immediately pointed to me and said that I would probably be able to address the matter better. Well, usually that would be the case but not so much at that particular moment. Luckily the makers had helped out a bit and I was able to explain our recycling mission. He looked thoughtful for a moment and then said he sold his shotgun art for $25,000. I told him that was impressive and maybe he could just offer some token of that to us. He admitted that he did one for warren zevon and asked his assistant to find the picture of that. She brought out a book with a picture of warren and hunter at a target range somewhere, the target standing between them, shot up and paintballed by hunter. Things to do in Denver when you’re dead, I said, quoting a name of a zevon song. He looked at me and said he missed warren terribly.

We were off track and I did not see a way back. He said he was not really feeling it and his art could not be forced. He needed to enjoy the act of shooting and if that was not happening what was the use. I agreed and said he probably did not want to startle the neighbors.

Fuck that, he said, he loved to startle the neighbors, he was out shooting just last night, freaking them out. I thought that was a contradiction, I said and that did not sit well. I tried to recover by saying it seemed odd that he was able to just go out and shoot last night yet he was not able to do so this evening. the night was just starting for him, he said and he had no idea how it would end up but we should come back another time. I understood that I said but the event was starting tomorrow. I was not one to rush anyone’s art but all the other artists had already submitted their bins. But whenever he was ready, we would accept his finished product, gladly.

And so we left empty handed. When we walked out I took out my camera and snapped a picture of the entry way. Evidence attached, my friends.

When we walked into hunter’s house this time we were greeted by tammy’s godmother, didi. She was the connection. Since she dates sheriff bob, who is one of hunter’s close friends, she was able to arrange for the manifestation of this idea in the first place. She signals for us to wait while she finishes up her cell call. She is speaking with her daughter who is distraught about her father’s recent
diagnosis of cancer. After a few minutes she cuts her off, saying she has to help the tamster with a project. Wow, obviously not a lot of love lost for her ex husband. At this point I feel like I am in a Mary Hartman, Mary Hartman episode. She beckons tammy inside and tells me to wait in the living room because hunter does not like crowds. I start to protest, saying I was just in the kitchen speaking with him last night. I stop myself and say I will do whatever it takes to finish this mission. And I realize I am in the prime position to observe.

I am standing in the room with the xmas tree and it has a window into the kitchen that allows me to see and hear everything hunter is saying. I cannot see anyone else but he is in my direct view. I look around me. there is a lifesize poster of Bobby Kennedy on one wall, Ralph Steadman paintings on another with various posters,
proclamations and signs hung elsewhere. Notes, drawings, a little head of Nixon, batteries, lots of batteries. Hunter has changed his clothes, with the exception of the white overshirt with the green palm trees. His cocktail selection seems the same, orange juice, beer and vodka. Even though it is earlier than our previous night’s visit, everyone seems much drunker. The sheriff is slurring his words, and
hunter is agitated. I do not think he ever really signed off on this project and I am concerned with the possibility of abject failure or worse, having hunter really angry with us.

When didi reminds hunter why tammy is there he seems to vaguely remember our cause. He begins to rail about the reasoning behind our quest. What he really thinks is that espn should be giving him an award. Oddly enough I had gotten an email earlier in the day from the creator of the x games, ron semaio. He said that hunter was giving out a gonzo award on Sunday. I was sure this was what hunter was referring to, but I could not participate in the conversation from the other
room. That was really a challenge for me but at the same time really interesting. I had tried to get a lipstick cam before I left the gig but I did not have enough time to find one. It would have been some amazing footage. Regardless, I stood and listened. He really seemed to be completely uninterested in participating in our recycling efforts. Everyone in the room was making suggestions on what to do.

And then he got pissed. He said fuck it. goddammit, just fuck it, lets get this over with. He said he was going for the shotgun. Sheriff bob told him he would get it and hunter should just sit. Hunter said it was his house and his gun and he could get up an get it whenever the fuck he wanted to. He got out of the chair and moved towards the other room. Getting out of the chair was not easy. Walking was not easy. It was not just the liquor, he genuinely had a hard time with his mobility. He moved out my sight but then I heard the shotgun cock. At this point, I was happy to be in the other room. He brought the gun back to his seat and asked for some birdshot. The bin was outside and I was concerned that hunter did not realize that and would start shooting inside. He and the sheriff disagreed on what
to do next. Hunter just wanted to get the goddamn thing over with. I silently agreed. But hunter could barely navigate the kitchen. And it was still snowing outside.

Here is what I have omitted when I relayed the story to my x games cohorts. Hunter never shot the recycling bin. Sheriff Bob actually pulled the trigger. it is easy to let everyone infer that hunter emptied the birdshot into the can. I just skip over the part of who did the shooting. I end at the part where hunter cocks the gun and requests birdshot. And skip right to the part where tammy and I bring the can into the kitchen for hunter to sign it. personally, I thought we were pushing it a bit at this point but we had to try to get something to clearly identify this as hunter’s trash can. He asks me again why he should contribute this to espn. I tell him that people are generally lazy and we are hoping to try and convince them to recycle by getting artist’s like him to support the idea. 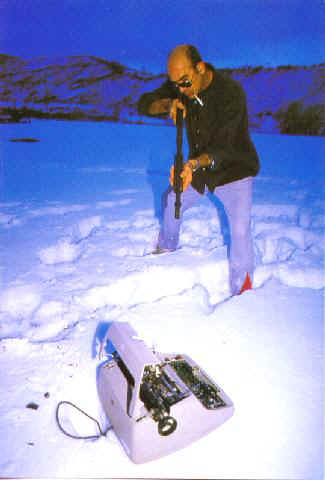 He mentions for the 2nd time that espn should be giving him and award and I open my big mouth and say I think that is already in the works. He stops for a second and asks for details. I tell him what I know and he asks his assistant if anyone from espn has called to make arrangements for this. she says no and I assure him that I would have someone call him the next day.

Tammy hands him a marker and asks him to sign the side of the bin. He uncaps the pen but then starts to shout. What the fuck are you trying to pull. Trying to get me to endorse some corporate fucking godamn company from Carbondale. That is bullshit. Tammy tried to explain that the company who’s name was on the side was indeed the waste management firm who did the recycling. He was livid, asking if
we thought he was stupid. We tried to reassure him saying we would cover the name. bullshit he replied, as soon as I turn around, you will uncover it and that was just wrong. Tammy asked hunter for a roll of red tape that was sitting on the counter in front of him. He handed it over but when he saw what she wanted to do he yanked it out of her hands, saying we should have come with our own goddamn tape if that is what we intended to do. He would not be giving anything away from his own home and we should have come better prepared. But then he started to color in the name of the waste management company and scrawled his initials on the side of the bin. That was great I said, we really appreciated his help. I would have someone get him the info on the award and we would just take our trash can and be moving on.

We carried the bin outside, and wrestled it in the back of the car. I could hear the buckshot rattling around at every curve in the road. Tammy looked at me and said that no one needed to know that hunter did not actually do the shooting. I believe that is called lying by omission but I found myself telling the story in different ways, never saying that hunter fired any shots but realizing every single person would have sworn that is what I told them.

I just found out that hunter Thompson shot and killed himself tonight. As bizarre as it was, I am glad to have shared a bit of his lunacy. I wish I had been able to sit down and have a few drinks with him. At least, I got in to see the wizard and that will have to do.