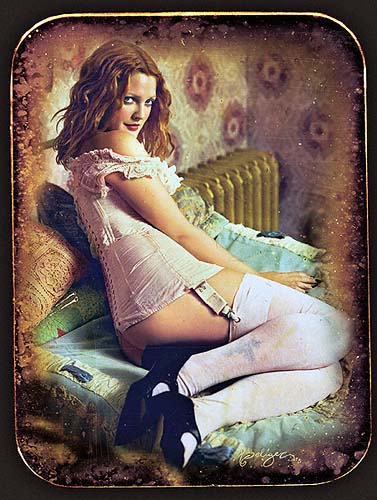 and its raining all over la.

certainly not the type of day one would want for miss never been kissed.

drew barrymore was born into hollywood royalty in an ordinary hospital room in the less than glamorous town of culver city, california. closer to south central la than to hollywood but its all good. she found her way into our hearts in no time with the little indie flick ET.

ET was the first movie that i ever saw twice, and i wasnt the only one.

aliens, kids, moms, foreigners. everyone saw ET and nobody admitted to seeing it because of drew but look at her career, she kept making films but ET never did. hardly anyone did

although i hear the director is still picking up some work here and there.

drew barrymore might not be the greatest actor but i liked her in guncrazy and the wedding singer and ever after.

i liked what she did with the charlies angels movies

but her best work, i still think were the little tiny shorts that she did with her then-husband mr tom green of canada.

drew and tom were doing a lot of home videos. not the pam and tommy type but the real-deal ones where theyd get drunk or stay up all night and keep it real while staring into the camera and telling it like it is.

drew in one of them said how when she walks into a room everyone stops talking and it bums her out.

it makes you think, what sort of parties are you going to baby? let me throw you a party where even when the singer from Eve 6 threatens to get naked nobody notices.

poor drew. word is that her latest beau the scraggly haired drummer of the strokes is no longer hers. shes tried so many different men, why cant she keep one? has she gone black? i dont think so. maybe she should. maybe she should go blogger.

well happy birthday drew barrymore. movie star with whom without i would never have met the daisy princess and therefore probably wouldnt have had you and you and you as readers.

thirtieth birthdays can be a bitch so if you want to do something fun i hear theres a swinging party at the henry fonda tonight.