that MaleWhoreFakeReporterFakeNewAgencyGate is much to concern himself with.

“I’m a libertarian — I’ve got no problem with gay male prostitutes. Or even gay female prostitutes (they have those, right?). Heck, I’d legalize prostitution — gay and straight — if it was up to me, and think of its practitioners as every bit as respectable as other professionals like lawyers, lobbyists and journalists. (Maybe moreso, as I suspect the client satisfaction rate is higher . . . .)”, Prof. Reynolds snickered last night.

Prompting a reader, Thomas Castle, to write in to correct him:

You are, again, missing the point entirely. The problem with Gannon isn’t that he’s a gay male prostitute, it’s that he’s a vetted WH reporter using a pseudonym and masquerading as a journalist when he is, in fact, merely a shill. THAT’S the offensive part. This business that he was booted because he’s gay, or a prostitute, or both is bogus, although I’m sure some of the fundies do indeed have a problem with it.

(L)et’s see: “Masquerading as a journalist when he is, in fact, merely a shill” would disqualify rather a lot of the poseurs I see shouting at press conferences. As for the gay angle being why he was booted — that’s what Howard Kurtz said, and I believe it. And while you can claim that this isn’t really about the gay angle, a quick look at the juvenile gay-themed stuff on the lefty blogs suggests otherwise. I should also note that while Moyers did charge that Gannon was a gay male prostitute, I don’t think that’s been clearly established. Not that there’s anything wrong with that.

digby explains why the Jeff Gannon/Jim Guckert scandal is important to him.

I personally have no problems with the Bush White House needing to blow off some consensual adult steam. It’s a stressful job. If gay hookers are going to help them relax then who am I to argue? I’m a liberal. I have nothing against gays or hookers.

But for a moment let me think as a Republican would, if the shoe were on the other foot:

So many questions so few answers. Just why did JimJeff get such special treatment? It’s not like they didn’t already have a bunch of ready made shills to ask softball questions. Les Kinsolving’s been throwing partisan bombs for years. They certainly didn’t need JimJeff to transcribe RNC talking points when they have the Beltway Boys to do it on national television. 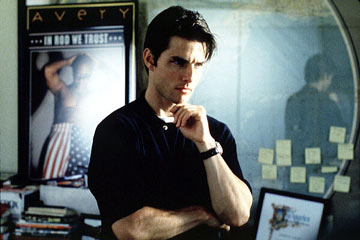 Scotty said that the president called on JimJeff of his own volition. A coincidence? Or did someone request that JimJeff get a special treat that day?

And has it ever been logical that this nobody from a vanity web site would get access to the Plame story? Why him? JimJeff claims that he never actually saw the Plame memo, yet he clearly knew of it. Could it have been pillow talk?

I don’t have a clue. But, I do know that if this were 1998, we’d be knee deep in congressional investigations into the gay hooker ring in the White House. Every news crew in the DC area would be camped out on JimJeff’s front lawn. A wild-eyed Victoria Toensing and panting Kelly Ann Fitzpatrick would be crawling up on the Hardball desk rending their silk teddies and speaking in tongues while Matthews’exploding head spun around on his shoulders.

But, it isn’t 1998 and it will probably not even be mentioned. And I’m not a Republican so I don’t think, as they would, that it’s necessary to dig into every single White House staffer’s sex life to find out who leaked a confidential memo to a gay hooker.

As a Democrat, however, if gay hookers are running around the White House I do find it somewhat frustrating that we have to put up with this shock and horror bullshit from the right wing about average Joe and Jane gay person wanting to get married and have a family. Please.

stay tuned to see ifinsty write just as flippantly about BushCo cockblocking former US POWs from suing Iraq for torture, or see if he supports the troops.