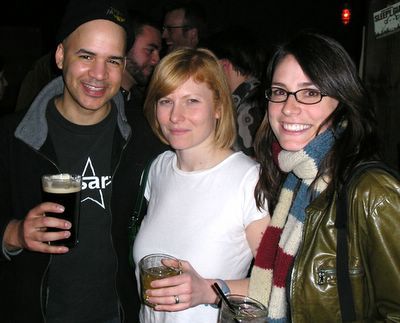 today i met the lovely and talented raspil k iverson who is shorter than she looks and very sweet and has the sweetest lil texan accent that you wouldnt expect but there it is.

we ate at the ironworks which is a bbq place downtown.

ok im drunk. lets just get that out in the open. because of that i wont worryt abvout my typing. sk has a big bottle of rum and everywhere i have gone people have iether bought be free drinks or given me drinks or the drinks are so cheap that they may have well have been.

raspil was cute. all my fans are cute. bunny mc is midflight right now or mid driving or mid something. perhaps she will call me mid-nightish.

have i told you how hot madpony kristin was? she is. and tall. she left her shoes in my hotel room. dont assume anything out of that. everything was very proper. she has a fiancee, you know. shes a good girl and oughtta run for vice president cuz everygthing she says is perfect and funny and a little awesome. i think ive fallen for her. i think she knew i had fallen for her so she i think was no long amazed by me. if i had played it cooler i think she would have followed me to the hottub insteade she kept me at bay with the glare of her huge engagement ring.

doesnt matter, im going to auction her shoes on ebay as soon as i get home, so start collecting your rubels.

sk has been the greatest host, she is watching obama on oprah like a perfect host, letting me use her computer, letting me drink her rum, letting me drag her around to meet these people at all these weird places.

the bbq place that we went to had huuuuuuge ribs. i had the jr rib plate, if you can believe it. it only cost $9. beers were $3. they had a pic of the president up and raspil warned me that it would be there, but even idiot leaders can know where the good food is, so why not.

austin is one of those bigger little towns. lots of room. lots of good stuff.

the rockers have arrived. you can tell rockers from “Interactive” people pretty easilly, one thing that seperates them is that they have little uhaul trailers hitched to their explorers for their gear. and they look like a band.

some of the bands are very skinny and pale. the girls should be extactic. for some reason they arent. maybe its cuz its chilly.

im sorry i havent linked a lot of people. its because sk and i keep talking and i feel bad whenever i type so i type whenever shes on the phone which is rare.

anyway i love it here and i want to come back next year. maybe i will host a blogger panel of Topless Chicks Who Don’t Give A Fuck.

life something + norway loves me! + this what we do now + blogger buzz + msnbc loves me!

i wanted to tell you a lie about a girl i didnt meet at a bar last night but im having so much fun here and none of it revolves girls twirling around my hotel room that that is the story.

one that none of you would probably believe, even though much of the fun involves rum bud amaretto baileys and jd.

the bellboy told me that all i had to do was say the word and i could use the computer in the managers office but i just stayed in my room all morning writing long hand into a legal pad and when sk picked me up to write at her house all i could think is dont lie to the good people of the internet, tell them that youre loving austin loving texas and loving the fact that something as gay as blogging could get you mad props from people around the world.

last night i passed out early even though i wanted to stay up and watch hbo like a normal person but the truth is if i dont have something to do with my hands i get very very sleepy.

i think thats why people doze off on the bus.

yesterday sk and i went to this great bbq house by her home. they had bbq sauce in the squeeze things normally reserved for ketchup. they sold to-go slices of homemade pies. they had menus under glass and thick pork ribs and soda in cans.

we ate and walked in the cold and talked about mcdonalds and i dont think of chilly texas evenings when i think of spring break vacations but thats why we live – so we can see all the little unexpected happy surprises that come around.

remember that all you barely legal know it alls who think that you can see into the crystal ball of the future. i have been to the future and i come back to you to say you dont know shit and thats the good news.

tonight we may drink with bunny mc