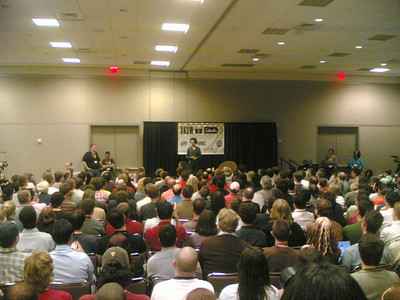 of the lovely sk smith. we’ve just had quite an eventful morning/afgternoon.

thankfully sara had eggs and bacon crackling and when i heard the toast pop up i took off my nightcap and made my way to the spacious kitchen.

soon i had shit showered and shaved and we were on our way to the austin convention center which is about 1 mile away from the dan-n-sara ranch. everyone has ranches out here. its awesome. also gas is a nickle. fuckers.

go to the check-in area and they gave me a badge and i said hey can sk smith get a badge or something, im sleeping on her couch, they looked her over, didnt find her incredibly dangerous looking and gave her a backstage pass. rock on!

they ushered me to the “green room”. i was too nervous to eat or drink anything but i was very warmly recieved by my fellow panelists and we sorta went over the topics that we were going to discuss and before we knew it we were being asked to go to the meeting room.

within minutes the place was pretty well packed. jason noticed that, as expected, most of the black folk were up on stage.

the panel went well. nobody could see how much i was shaking. i was shaking like crazy. ever do acid? you know how when you’re first coming on it feels like your body is going through turbulence? yeah me neither. but i was nervous. i felt retarded. everyone was laughing at my jokes but i was still shaking. i shake when i want to talk but i hold back. i was holding back because i was on a panel with four other people who were immensely cool who were all saying great things. i kept trying to pinch my thigh to stop me from shaking. nothing worked. i tried deep breaths, drinking water, anything. nothing worked. only when i talked was i able to mellow out. the energy had to go out of my body.

q. who do you link?
a. i’ve been linking a lot of pot smokers lately (laughter) 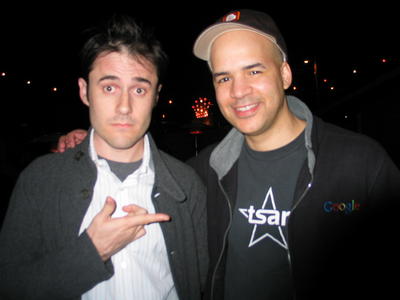 i saw matt from metafilter there, i saw henry copeland from blogads, mc brown was in the house, and jason and eric from blogger were there. i saw a few black people who didnt laugh when i said, “not every black man wears a koofi” but later one of them came up to me to tell me that i was really good. he looked like christopher darden. thanks bro.

then immediately we went down the hall for the Bloggies.

the Bloggies were very interestingly organized. they assumed that nobody was there. so when they got to my award I WON so i took a few steps toward the stage to thank God and my mom and before i could make it they were on to the next award. which was fine.

no really, it was fine. it was nice to be nominated, it was better to win, but it was best that i didnt get on the mic because i was gonna give a painfully long speech talking about how the camgirls need more love and about how the republicans want to take blogging away from us. all lies but fun lies that i certainly would love to hear some crazy man say at a weird award ceremony at a convention hall – wouldnt you?

i poked my head over at the Borders Books booth who were selling my book. they had 5 people signing filling up the table so i asked if i could come back at 3pm. they said yes, 3:30p. so me and sk smith and jason goldman, and biz stone and eric case went to Casino El Camino, promptly insulted the punk rock bartender who had huuuuuge mountain climbing caribeaners in his ears.

Me (to Goldman): you guys should be stoked, this whole Interactive thing is sorta here because of you.
Goldman: Shit, Austin wouldnt even be here if it wasnt for us.
Me: Yeah it would just still be a suburb in Wisconsin.
Crazy Tattooed dude at the Bar: hey, fuck you.
Bartender: yeah, someone piss in their drinks.

we ate bacon cheeseburgers in the back patio and whipped green peppers at the birds who tried to shit in sara’s hair.

then we went back to the convention center and i sat there with a small pile of my books. nobody was there to see me. next to me was a huge pile of Al Franken’s book. many piles. people were lining up to get his book. it was full on Spinal Tap action. someone should have kicked my ass. mr. copeland bought my book so it wasnt a shutout. soon they asked me to leave, which i did gratefully.

now what am i going to do with 39 books? perhaps we will have a sale when i get home. fuck that. sale now. email howtoblog @ tonypierce.com and you’ll get a book for $18 + $5 shipping, signed.

ok now we’re off to the Google party and then the Gawker party. im living the life of MC Brown party hopping and shit, but thats what you do when you get out of the house i suppose.

word is at midnight ms kristin madpony will arrive and then my day would be complete.

my thanks to the academy and everyone who has been so nice to me here.

matt from metafilter took this pic of our panel