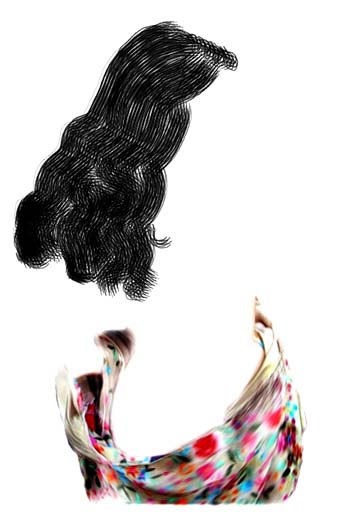 i was advised to light candles, to say prayers, to click my heels, to do what i would normally do to prepare for an important day.

i wish i could tell you what’s going on.

soon i will tell you whats going on.

i will say something like, remember on 4/20 i told you all to whisper a little prayer for your old pal tone? well this is what you were trying to stoke me with.

the problem with being tony pierce, besides having to live up to the hype when i meet people, is that a lot of things that i do in some way or another gets tied to this blog

so of course on the eve of one of the biggest days of my life, the day where some very important people will come to visit this blog (some for the first time ever) they will be greeted with anti smoking from a bong,

a hitchcock poster defaced with some green bud,

an illustration of a naked woman laying on a very happy giant panda,

pics from a strip club,

and the last few chapters of the time i went to hell and met mr kurt cobain.

sex drugs and rock. fine for keeping the site meter counter spinning, but not exactly the first impression that one would want v.i.p.s to have contact with.

and i know what you’ll all say,

you’ll all say, oh tony youre a great writer youve got nothing to worry about.

and i’ll say these people are surrounded by talented people all day, many of whom i dont hold a candle to. these arent xanga blogs im being compared to tomorrow.

and just a few minutes ago my buddy was all

dont be nervous tony, no way are these people going to be tougher on you than the cardinals were on the candidates to be the new pope. and look what happened, ratzi the nazi got picked! theres nothing on your blog as incriminating as being a hitler youth who grew up to be so backwards as to think that condom use to help prevent HIV is a bad idea.

i was all yeah, good point.

and then he fixed my tivo.

so yes, light your candles tonight my friends. and if you pray, say Lord let’s give a break to our pal tony who doesnt really deserve it or has truly earned it but who is ready to take this shit to the next level.

even if its a level where you hafta capitalize

and you cant say “shit” 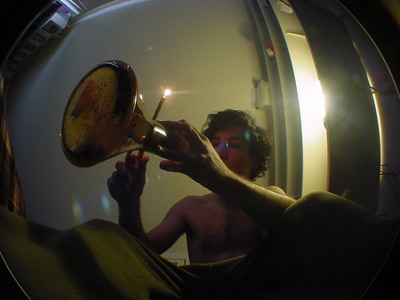 he’s got a six foot bong, the greenest buds and a camera that he uses to show you how it’s done.

since im straightedge i wouldnt know the first thing about the wacky tobbacky so i entered into a chat with mr. disestablishmentarian

xxbusblogxx: when was your first time smoking pot?

BigBadAnti: when i was a freshman in highschool. i submitted to my friends and their peer pressure. (thanks whitey!)

xxbusblogxx: how do you normally call it? weed, herb, pot?

xxbusblogxx: how often to you clean your 5 footer?

BigBadAnti: nah, i think it it makes you higher to hold it in. although there are two schools of thought on why it makes you higher. one group thinks that the THC in the dope has more chance to enter your blood stream. and the other group say that it’s partly the THC entering your blood, and partly lack of oxygen to the brain. i always hold my hits in as long as possible.

xxbusblogxx: whats your favorite situation to get baked? 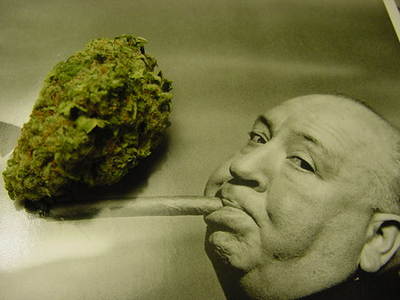 xxbusblogxx: via joint or pipe?

BigBadAnti: bong! but a pipe if there is no bong, and i GUESSS a joint if there is no pipe. i smoke too much for joints. who has time to twist those things up all damn day? im a working man.

xxbusblogxx: arent you afraid of spilling your bong in your car?

BigBadAnti: im about as afraid of spilling my bong and i am about spilling my large sprite from taco bell. cup holders baby!

xxbusblogxx: ahahahah
xxbusblogxx: whats the weirdest contraption that youve ever smoked out of?

BigBadAnti: a gravity bong. it involves a lot of home arts and crafts (ie, a two liter bottle emptied and the bottom sawed off, ect), and a sink full of water. i never thought it was worth all the effort. i’ve also gotten high from a pipe made out of an apple. you can make anything a pipe, just about.

xxbusblogxx: you should definately make a movie of making a gravity bong

BigBadAnti: perhaps. if i can find someone down to do all the arts and crafts part. mebbe whitey will be down for that… who knows.

xxbusblogxx: where was the coolest place youve ever gotten high?

BigBadAnti: top of half dome in yosemite. and/or backstage at the Cypress Hill smoke out tour, with the Wu-Tang.
BigBadAnti: at the time, we were all “FREE ODB!!!” 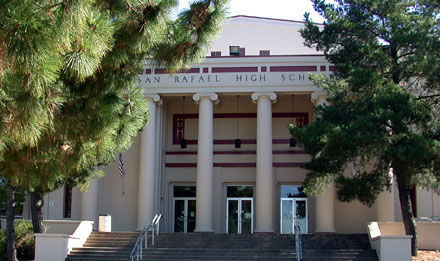 in the spirit of this day lets copy and paste from a Phish messageboard via craigslist regarding the meaning of this special day.

Conventional wisdom: The most common tale is that 420 is the police radio code or criminal code (and therefore the police “call”) in certain part(s) of California (e.g. in Los Angeles or San Francisco) for having spotted someone consuming cannabis publicly, i.e. “pot smoking in progress”; that local cannabis users picked up on the code and began celebrating the number temporally (esp. 4:20 a.m., 4:20 p.m., and April 20); that the number became nationally popularized in the late 1980s and, more ferverently, in the early- to mid-1990s; and is colloquially applied to a variety of relaxed and/or inspired contexts, including not only pot consumption but also a “good time” more generally (in contrast to the drug war surrounding).

Conventions are legends: 420 is not police radio code for anything, anywhere. Checks of criminal codes (including those of the City of San Francisco, the City of Los Angeles, Los Angeles County, the State of California, and the federal penal code) suggest that the origin is neither Californian nor federal (the two best guesses). 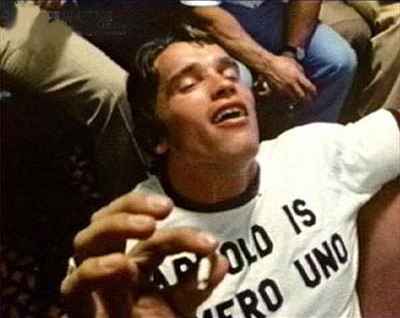 One state does come close: “The Illinois Department of Revenue classifies the Alcoholic Liquor Act under Part 420, and the Cannabis and Controlled Substances Tax Act are next, under Part 428.” (RB 5/19/99)

True story?: “According to Steven Hager, editor of High Times, the term 420 originated at San Rafael High School, in 1971, among a group of about a dozen pot-smoking wiseacres who called themselves the Waldos. The term 420 was shorthand for the time of day the group would meet, at the campus statue of Louis Pasteur, to smoke pot.

“Waldo Steve,’ a member of the group who now owns a business in San Francisco, says the Waldos would salute each other in the school hallway and say “420 Louis!’ The term was one of many invented by the group, but it was the one that caught on. “It was just a joke, but it came to mean all kinds of things, like `Do you have any?’ or `Do I look stoned?’ ‘ he said. “Parents and teachers wouldn’t know what we were talking about.’ The term took root, and flourished, and spread beyond San Rafael with the assistance of the Grateful Dead and their dedicated cohort of pot-smoking fans. The Waldos decided to assert their claim to the history of the term after decades of watching it spread, mutate and be appropriated by commercial interests.

The Waldos contacted Hager, and presented him with evidence of 420’s history, primarily a collection of postmarked letters from the early ’70s with lots of mention of 420. They also started a Web site, waldo420.com.

“We have proof, we were the first,’ Waldo Steve said. “I mean, it’s not like we wrote a book or invented anything. We just came up with a phrase. But it’s kind of an honor that this emanated from San Rafael.'” – Maria Alicia Gaura for the San Francisco Chronicle, 4/20/00 p. A19

There are a variety of other explanations, all much more interesting than “police code”, and many plausible. Some are more likely uses of the 420/hemp connection rather than sources of it, such as the score for the football game in Fast Times at Ridgement High, 42-0.

im sure the pro-pot instapundit will have lots of posts about this today + 4:20 in the bible + high times