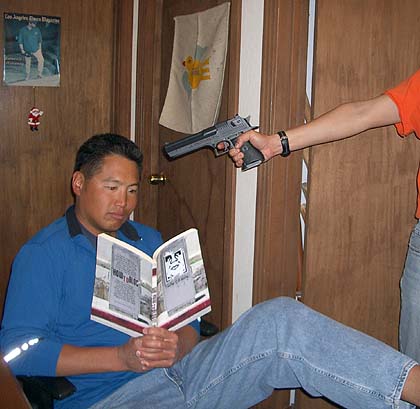 but first let me thank you for all the nice things that you said about me not getting into rad school. the support that ive gotten through this blog is unbelievable, and the biggest reason why i do this.

someone asked me the other day “why dont you do photo essays any more?”

and i said it was cuz of my carpal tunnel.

she said, “do you have carpal any more?”

and i said not really,

and she said, “then give the kids some photo essays, you’ll heal.”

i wanted to go to grad school because last year i was able to teach a class at ucsb and afterwards my former professor told me that i should seriously consider doing what it takes to be a college professor because she thought id be good at it.

because i completely trust anything that she says, i went for it. this woman is one of my biggest idols. without her theres no way i would have written in college.

she basically discovered me in a lowly Poetry 10 class and put me in the College of Creative Studies, which instantly changed my life.

the college of creative studies had no grades, tiny classes, and personalized instruction. you could take any class at ucsb, you could check books out longer than regular students from the library, and you even got pizza on fridays.

because there were no grades, no tests, and no finals, i immediately started working at the campus newspaper (pictured below) where i ended up writing more articles than anyone. blah blah blah. needless to say, my college experience was a magical one and im still very close with the friends that i made there, so the prospect of being able to be employed in that world, helping kids learn how to write, was to say the least, appetizing 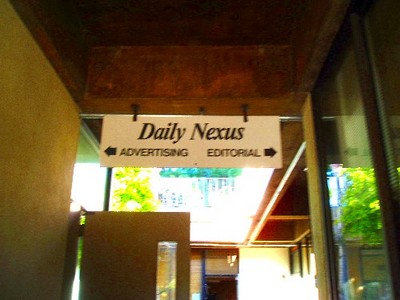 especially if you knew how ive been earning my living over the past half decade.

when youre 25 and have a few years of unrewarding employment its not such a bad thing cuz youre getting laid, meeting people, learning shit, transitionning into the real world.

but when youre 111 riding the bus and the best thing going for you is your gayass blawg you can either jump off a bridge or start applying for things that have been recommended to you by those cooler than you.

yes i could have applied to more than just one school, but i didnt want to go anywhere else. my professor was high on that school and its supposed to be the best in california.

i went to the best undergrad program, why not the best grad school.

but if i coulda gotten into uci that woulda meant that in three or four years i could apply over at santa barbara in hopes of teaching there, which quite possibly might be the greatest gig of all time.

so yes this step was pretty big and one reason why i only wanted to go to the best school is so it could help me get the best gig.

in truth i didnt have the best application. all of my poems were old, my essay wasnt very good, and i didnt do everything i should have done to get in.

next year i wont make those mistakes.

and next year i wont apply for the poetry program either.

again, thank you for all your very nice comments, and now let me direct you to the greatest thing ive seen this week, how to blog by mr bloopy and costarring mr bwg.