she’ll say shes in town which is about once a week and she’ll pick me up at work and drive me home.

and then she breaks up with me.

or some one. sometimes its cuz she says my apartment is always so fucking filthy or cuz the tabloids would go nuts if they ever found out or its cuz my dicks so big it hurts jk or cuz i watch too much tv or cuz all we ever do is fuck or cuz i dont wanna marry her or cuz like boys ii men we’ve hit the end of the road.

at this point i dont even pay attention to the reason cuz to me all it is are the demons in her head turning a good thing into a bad thing. the opposite of turning water into wine, these demons turn omg omg into whines.

and broadened her horizons.

so either we’ll sit in her limo and fight for like a minute and then she’ll cry and then we’ll work things out in like minutes and cuz im an idiot i will agree to whatever she proposed which is usually no more lovin and then before i know it we’re making out, and the evening always ends in a series of one last kisses.

one more juicier and delectable and memorable
than the last.

which is all of the time except when shes breaking up with me. 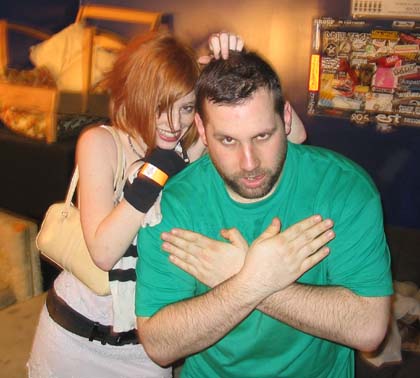 i have worked for the xbi directly and indirectly for nearly 15 years now, i went to the greatest college of its day with the coolest people, ive made out with the hottest girls, ive seen all the greatest concerts, i told her with one hand down the back of her jeans palming her thonged tanned ass digging my knee just a little higher than necessary, ive done it all and now i know why all the great poets died before fourty.

and anna said well thats why the lord wants us to have kids, so it’ll give us something to do, something that makes us appreciate our free time and our opportunity to listen to a zillion bands in the heat of the desert.

and i said fine then i’ll go. which wasnt the answer that she was looking for nor was my response when she asked me who i was taking.

and did she say weezer or the raveonettes or m83 or k-os or wilco or sage francis (pictured, with bunny mc),

and tomorrow i will have pictures for your asses.