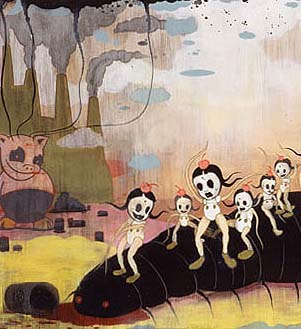 if i was president i would make it illegal to flick a cigarette out of a window.

if i was president i would build public toilets all over the damn place. Seriously.

if i was president i would ask the bottled water people to think of a smarter idea than little baby blue plastic bottles to carry our precious purified h20. Remember when milk came in cardboard boxes. i bet that shit isnt filling landfills.

if i was president id send our nuclear waste to the sun, or threaten to send it to whoever the fuck is talking shit about us.

if i was president i would fine polluters more than people who cursed on the radio.

if i was president i would ask the stoners to flow the country monies to research weed. and with that research money we would hold serious testing on the Discovery Channel every day at 4:20p. set your tivos. and for once and for all we would see the pros and cons about marijuana and hemp and if it was true that weed couldnt kill you and if it was true that hemp could produce paper more efficiently than trees and if it was true that pot seed oil was good for us and could help those with hypertension and diabetes, then id go to congress and id say see fuckers. see! and we’d legalize that shit. but if it wasnt just some hippie vice that made you fat and stupid then id say sorry deadheads and we’d end the debate.

i hate people who insist on living in the dark ages with their heads intentionally up their asses.

thats not what america is supposed to be about.

this should be the united states of science and reason and logic.

i am all in favor of people smoking shit that will kill them. do it in bars do it in restaurants do it wherever you want. this used to be the land of the free. and bars should be free to run their places however they wish, and restaurants should be allowed to have a smoking section or not.

if people want to carry guns, carry guns. maybe we should teach the kids how to be better shots in school too. how would you like that america?

but dont litter your shotgun shells and boxes in the woods and dont flick your fucking butts on my freeways.

dont spit in the subways.

until my sprinklers went off at the buttcrack of dawn.

telling me what type of recycling bin i could throw my shit in when i was done.

and not only would abortions be legal, but theyd be encouraged

cuz theres nothing more dangerous to this planet