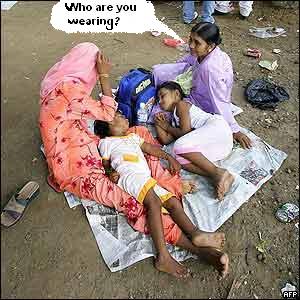 and do something really spectacular that week like throw a virus into the internet that fucks up a bunch of computers, or cause a major pileup on a freeway, or cause a crazy tsunami, or help phil collins release a new cd, some of the arch devils will let you go to a raider game.

i was bad last week but not that bad.

two of the guys who got to go came back this morning and told us all how great it was.

i was super jealous cuz i love the raiders.

the best gift i ever got was a long time ago my old girlfriend got me Raiders / Broncos Monday Night tickets and she was so cool that she didnt even make me take her, she said i could take one of my housemates.

i love that girl.

theres lots of ways to make it back to Earth temporarilly. you can get a guest pass, or you can get a little assignment, like when i had to be a santa claus in the mall that one day.

but sometimes you can come back to Earth on a permanant basis, the only catch is you are either disfigured in one way or another or you get a lame job.

lots of famous people are actually Damned Souls who worked out a deal where they could spend their time on Earth as opposed to shoveling coal, like im doing today, in the Depths.

Alan Greenspan is a great example.

Alan wanted to do a good job on Earth but his punishment for being an asshole in his past life is being a total imbecile in this life.

Which is why he has lost trillions of dollars in the economy as the Fed Chairman.

Some might think that he would want to cripple the US economy, being that he is a demon and all, but no, just the reverse. Some hellions have been known to get a repreive if they do a good job on Earth despite their doomed status. Jack Nicholson is a great example. William S. Burroughs is another.

These are men who were damned, worked out a deal to spend some time on Earth and faught against the devil’s prodding to do evil, and they served mankind with goodness. Sure they lost a few battles and took a golf club to a windshield or murdered a woman, but for the most part they led decent lives and inspired others to follow suit.

I got an offer last night to come back to Earth as an AIDS baby, but i declined. I’ll wait for something better to come up, like be a Black Republican Senator or something slightly evil like that.

speaking of evil, i saw hitler at the gym on saturday.

you’d think he’d be a big wig here, but he’s not, his assignment was to take over the world and he failed. he’s considered a failure. he hands out towels outside the sauna.

sorta ironic, but not really.

i kneed him in the nuts.

he couldnt do anything since he was chained to a rock.

ive been getting into a few fights down here.

verbungle + i was mentioned in Sploid! + merci emmanuelle