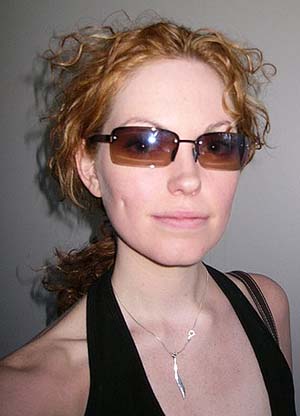 plainly. probably another time as well. her private parts had a sort of suction going on that was equal parts creepy/wrong and omg/omg.

her name was <3 i said, less than three? she said, i dont make fun of your name, please dont make fun of mine. i agreed and the suction continued. when she kissed me i time traveled in my mind. except i had no control of where i went. because my luck is sometimes rotten, i ended up in the gift shop of the smithsonian in 1989. i wanted to look around the museum, but it was after hours and i didnt have full control of my feet. when we stopped kissing i came back to earth. or wherever it was that i was. i opened my eyes and four of her hands retracted quickly. without moving her head she looked up and to the right and began whistling a carefree tune. we went back to kissing and i time traveled into the very near future. exactly what i was resisting. i tried to pull away from the caress but i phsyically couldnt. it was judgement day. two rows of white men with long white beards and pitchforks sat to the right of me while two rows of black men with long white bears and lightening bolts sat to the left of me. the opening strains of hells bells were being played and two giant feet and legs that reached into the heavens stood in front of me. everything was happening via esp. how dare you!

you will ruin the mix.

you never went to church.

it was so dull.

you could have taken over.

why do you think you were ordained?

cuz you needed me?

pride! i dont need you.

cuz you wanted me to?

and what do you do when you dont get what you want?

no whiners in heaven.

one of the feet rose. it looked to be made of cement. he wore sandals. a shadow blanketed me, blotting me out of sight.

she pulled away shreiking. i had bitten into one of her tounges.

someone busted through the door on a pale horse and swept <3 away from me as i sat shaking suddenly alone and dreading the inevitable future. vivian + all about george + my dentist has a blog! + flash