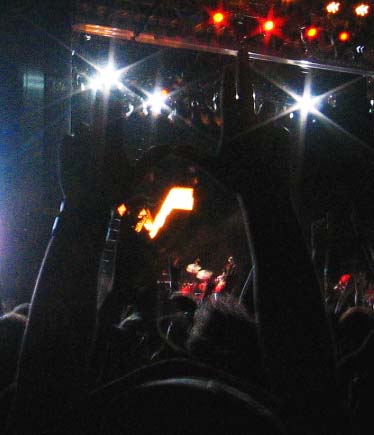 …Having attended last years Coachella, I can say the crowd that gathered for the Weezer set was comparable to the monster crowds that assembled for the Pixies and Radiohead sets last year. An amazing SEA of humanity, soaking in the weez. Some familiar weezer fan faces right in the front row too, waiting all day thru all the earlier bands to ensure their front row experience!

As weezer took the stage I jostled into the 100+ strong pit of photographers down front looking for fresh angles on what was clearly emerging as an epic night, before escaping to the stage where another crowd was gathered, this time of VIPs geting a close view from the side of the stage, (as VIPs will do), digging the show and providing challenges to a too-polite photographer!

Rick Rubin was there, loving every minute of the set, which was actually his first ever weezer show, despite having been working with the band for over 2 years. He was particularly stoked on “Hold Me.” Standing nearby and taking it in were Anthony Keidis of RHCP, Brett Gurewitz of Bad Religion/Epitaph Records, and Chris Katan of SNL fame (?!). From the soundboard area came the report that Cameron Diaz was watching the set, and reporting to her friends that “Weezer is a heavy metal band!” (?!?)

Earlier in the day Perry Farrel stopped by weezers dressing room and said hello and that he was looking forward to the set. Spotted when we first drove into the Coachella grounds was Jason Lee, just chilling out with some budrows. And back at the hotel checking in when we were checking out was Peter Hook of New Order. (“Hook. Aytch Dubble-oh Kay.”)

Circling overhead for most of the day was a small plane trailing the letters “WEEZER MAKE BELIEVE NEW ALBUM MAY 10” (see pic). Sweet!