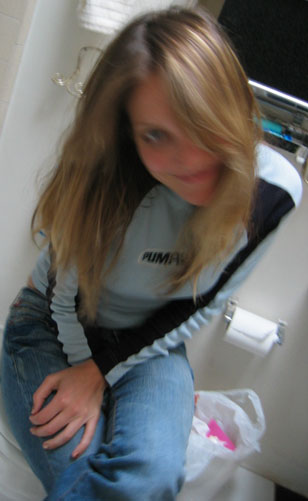 she told me to quit whining about the gig, take a little time off, clean my house, and then get back to the get back.

i know better than to whine about work when my mom had to deal with sexism and racism in an industry that had very few women and even less black women. she was one of the first computer programmers back in the day and you wouldnt know it if you looked at her vcr which is somehow still blinking 12:00.

my mom said that she tried to call me last night but i was probably at karisas birthday party and then my lawyer’s baby shower.

first i rode the bus to my xgirlfriends house who offered me her car for the weekend to get my resume together, do laundry, go to the bank, food shop, and go to these events. shes the greatest.

we spent some time sitting on her toilet

then some time sitting on her kitchen floor

then some time taking pictures against her will since she was too weak to fight.

when people meet karisa they think oh you just hang out with her just because shes so hot.

in LA theres a chick as hot as karisa passed out under nearly every palm tree. why do you think traffics so bad.

no, i love karisa because she is incredibly fun and usually up for whatever. on wednesday, her real birthday, her friend liz announced that soon itd be midnight and her birthday would be over, so she had to do something before her birthday ended.

someone yelled, make her steal a car.

someone else yelled, make her drink a quart of oil.

someone else yelled, make her jump in the pool.

none of these people were actually at our party, you should understand, we were just being exceptionally loud. 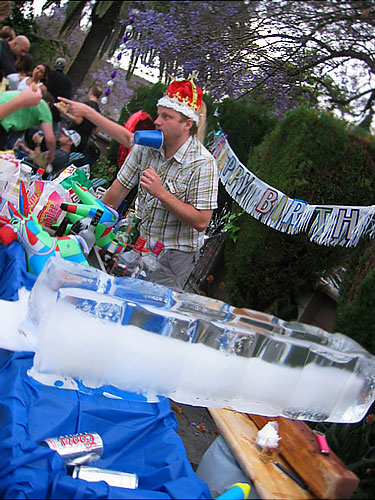 despite the fact that karisa didnt want to do any of these things, within minutes she returned from the pool, totally soaking wet

i wanted her to drink the oil.

yesterday i spent a lot of the afternoon with her brothers, who were exactly as cool as karisa had always claimed.

in perfect eastcoast style, they had decided that what their sister needed was an ice luge. an ice luge of course is a long block of ice that you get in east la, that you drive across town in your rentacar, that you carve a slight groove on the top, that you prop up with a ladder and a shim, that you raise up at the correct angle, that you then pour shots of booze down to the awaiting mouth below.

i ate a burger, took one, yes one shot officer, from the irrisistable ice luge, and then jetted over to my lawyer’s house, starring os who never gets mentioned which is sorta rude since he hosts this site.

kim looks just as beautiful as ever. she is less than a month away from delivering and she doesnt look like she has gained an ounce other than that gigantic round thing under her dress. seriously its like normal kim and then a ball in the middle. temendous.

tons of my friends were there. it was super fun. os and kims new pad is spectacular. the food was good and the wine was delicious. i had one glass since i was driving. f driving.

while shopping for baby shower gifts everything i liked was something that would probably scare the crap out of a baby.

i saw some cool ugly dolls, for example, but do little kids actually like these things?

instead i got them a washcloth with little ducks on the tips of the fingers, sorta like this, but not pooh, who disney sells out like a ho.

the star of the show, as always, was mr steve coulter, who cooked, cleaned, and re-introduced me to the idea of doing a podcast show with him when i found myself with some free time.

and for mothers day the lord let the cubs win